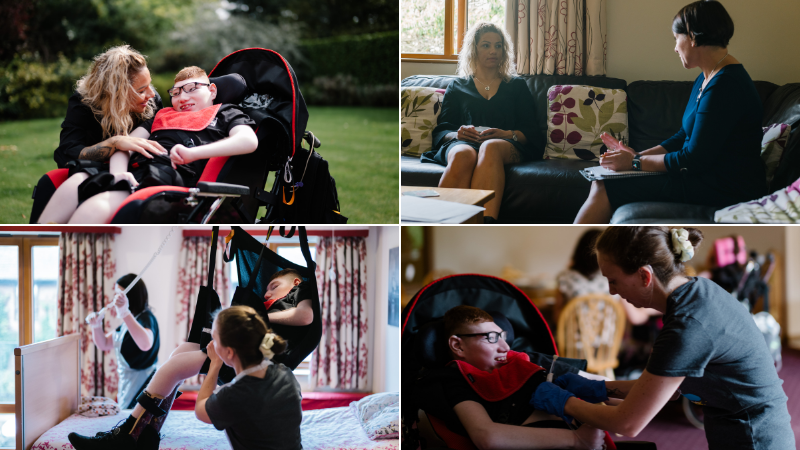 DAWN Tulloch, her son Paul and his younger brother Dylan have been coming to Francis House for more than 14 years.

Francis House Children’s Hospice offers care for children and young people who have a life-limiting or life-threatening conditions and provides essential support for their families.

The Manchester-based hospice is comprised of two buildings connected by a link corridor. Francis House for children and their families opened its doors in 1991 and Francis Lodge for teenagers and young adults launched in 2014.

Dawn Tulloch was introduced to the hospice when her son Paul was four years old. Paul, now 18, has severe cerebral palsy and seizures, as he’s grown older, he has developed scoliosis and hip displacement.

“When I was first told about Francis House I’ll be honest I was a bit reserved. I’d been through a lot with Paul, and it was twelve months after his major surgery. I thought they want him to go there because he’s not got long left and I wasn’t ready for that.

“The homecare team then met me and invited us to visit. We came and have never looked back since.”

Once a child is accepted at Francis House they can continue to come to the hospice as they get older. The young people are not transitioned to adult services. They can use Francis Lodge and the hospice services until either they choose not to or until they come to the end of their lives.

“When Francis Lodge opened it was amazing because it allowed me to remember that it doesn’t stop when Paul is 18 – it continues, which was comforting for me that I wasn’t going to lose the service and that the care for Paul will continue.

“Paul loves coming here. When he’s happy you see his face light up and he looks very stimulated. They’ve got multiple sensory rooms, the jacuzzi and a cinema room.”

Francis Lodge is a parent-free zone, equipped to cater for young people of all abilities and independence is encouraged. The six bedrooms are named after cities of the world, and each has a TV which is connected to a media system with films and songs as well as gaming available in every room.

There are two flats available in the Lodge for a brother/sister or a friend of a similar age (over 13) to stay. In addition, there is a bed settee in every bedroom to enable siblings or friends to stay in the same room if they prefer.

“It gives me a chance to have ‘me’ time – and recharge my batteries to be able to carry on and care for Paul. It is very tiring looking after a child or young person with complex needs and it allows me to have the energy to do it all again.”

Solicitor and Assistant to the Chief Executive, Rachael Taylor, is assisting Dawn so that she can make decisions about Paul’s welfare in the future.

“As Paul’s got older it’s got more difficult. The world is not adapted or equipped for people like Paul. You can’t take them out, there are no changing facilities. It restricts your family life because you can’t do things.

“I’ve got Dylan at home and people seem to forget that, we can’t do things as a family, and it puts a lot of pressure on you.

“Paul is classed as an adult now and as a parent, I have to apply to the Court of Protection to be appointed as his deputy. Paul can’t make decisions for himself, he’ll need a bank account as eventually, he’ll get his own benefits, but he can’t physically apply for things like that.

“Being Paul’s deputy will allow me to make decisions which I think are in his best interest like the places for him to go to for respite.

“If it wasn’t for Francis House, I’d have to go to a solicitor who doesn’t really know anything about Paul, his condition, and why it is that I’m fighting to be able to make the right decisions for him.”

It costs approximately £12,900 a day to keep Francis House open. The majority of this comes from voluntary donations. For more information, please visit: www.francishouse.org.uk.