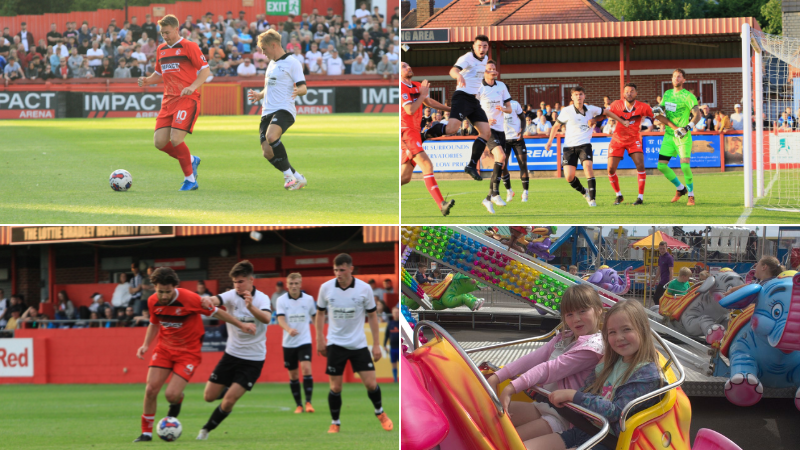 The Derbyshire Children’s Holiday Centre, which pays for youngsters from all over the county to enjoy five-day seaside stays in Skegness, will be benefiting to the tune of £1225.61 in ticket sales from the game, which Alfreton Town Football Club won 2-1.

The charity has been going for 131 years and provides holidays for children who are nominated because they may not otherwise get one, either because of financial hardship or other reasons.

The stature of Derby County coming to play at Alfreton meant that one match alone nearly doubled the total amount that the holiday centre has gained this season after the town’s football club, which in the season plays in National League North, nominated it as its chosen charity for the year.

The club has been raising money for the charity via sales generated through Ticketpass, an ethical platform which enables organisations to give away half the ticket admin cash to a charity of its choice. Over the 2021/22 season, Alfreton Town FC has generated £1,330.32 for the Derbyshire Children’s Holiday Centre.

Alfreton Town Council has also nominated the holiday centre as its charity, contributing a further £2,041 from a year of fundraising including hosting market stalls, organising a raffle and many other activities.

All the combined efforts from Alfreton have seen just over £4,500 raised for the charity, enough to send ten children on a week’s break to Skegness.

Wayne Bradley, chair of Alfreton Town Football Club, said: “As a football club in Alfreton and in Derbyshire we wanted to support local people. We feel along with the town council that it’s a good cause. It’s there to support not only the children but their families as well. Times are so hard at the moment and we wanted to give as much back as we could.”

A spokesperson for Derby County Football Club, which agreed that proceeds from the game should benefit the holiday centre, said:

“We are delighted that £1,200 was raised for Derbyshire Children’s Holiday Centre as a result of our pre-season friendly against Alfreton Town. We would like to pay tribute to the Alfreton Town and Derby County fans that turned out in such large numbers to play their part, not just on the night but for such a worthwhile charity at the very heart of the local community. We are proud to have contributed to Alfreton Town Council and Alfreton Town Football Club’s touching gesture to raise funds for Derbyshire Children’s Holiday Centre and congratulate them on their selfless efforts so far.”

“The Derbyshire Children’s Holiday Centre is a charity that I was aware of some years ago. I was very fortunate when I was mayor that I was invited to go to Skegness to see the holiday centre. I was so impressed by what they did and I’ve shown my support ever since.

“It’s so important that people are aware of this charity and what it does for children. It’s important they get a holiday that they otherwise might not have, which could be for a whole range of reasons.

“Thank you so much to everyone from this wonderful community of Alfreton who have given so much to our charity. The town council has worked tirelessly to raise funds for us over the year; the football club has been so generous in donating a proportion of sales through Ticketpass, and Derby County has played such an important role in coming to Alfreton to play and agreeing to support our charity too.

“We rely totally on donations to keep our charity going. Every penny raised puts a smile on the face of a child who gets to go to Skegness. We had to shut down for two years because of Covid so we’re putting all our efforts into continuing to raise as much money as we possibly can to keep our charity going now they are allowed back again. Thank you from the bottom of my heart to all the players and fundraisers from the town council for supporting us. We are profoundly grateful.”

Alfreton Town Football Club is planning to continue its support for the centre via sales through Ticketpass for its friendly games.

To find out more about the Derbyshire Children’s Holiday Centre and how you can support it, see www.dchc.org.uk/. With a million people living in Derbyshire, the charity’s plea is for people to be ‘One in a Million’, donating £4 a month by texting DCHCMILLION to 70085.