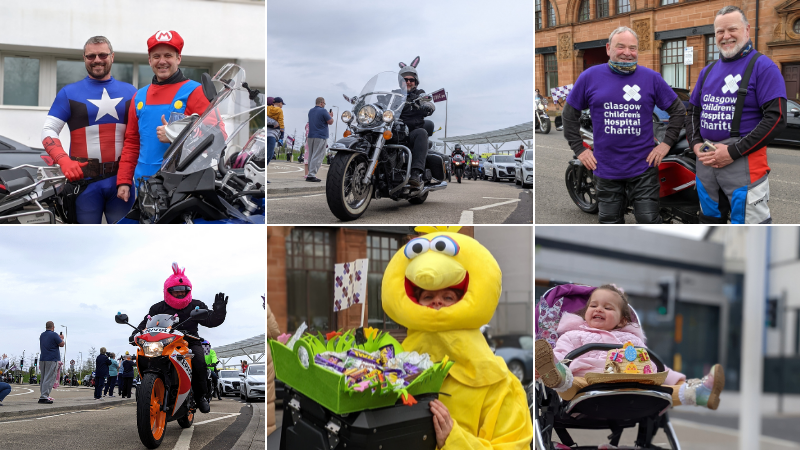 FOR the first time in three years, over 500 bikers in their Easter finery took to the streets of Glasgow to raise funds for Glasgow Children’s Hospital Charity at their Easter Egg Run on Easter Sunday.

The spectacular motorbike parade left the Merchant City in a flurry of feathers and colourful costumes on its way to Glasgow’s Royal Hospital for Children, delivering an Easter to remember for young patients.

The convoy of motorbikes, trikes and scooters took in the Broomielaw and crossed the city’s beloved ‘Squinty Bridge’ before riding up Govan Road towards the hospital.

The parade completed a loop of Glasgow’s Royal Hospital for Children before finishing in the grounds of Braehead Shopping Centre, where the charity hosted a family fun day for supporters.

“The Easter Egg Run is surely one of the city’s most-loved Easter events. After a three-year absence, we’re thrilled to welcome back our friends from the biker community.

“The return of the event this year is all the more poignant, as we are celebrating the charity’s 20th anniversary. The bikers have contributed so much through the years, which have seen Glasgow Children’s Hospital Charity commit more than £41million towards life-changing projects and support services for children in hospital.

“There is no sight quite like hundreds of bikers in fancy dress riding through the city, and seeing the smiles on the faces of our young patients as the parade passes through the hospital.”

“The mile-long convoy of motorbikes and their riders in fancy dress has certainly been something special to see.

“But there’s a serious side to the carnival atmosphere created by Glasgow Children’s Hospital Charity’s Easter Egg Run and that’s being able to raise as much money as possible for a very worthy cause.”

“There has been so much excitement for Easter Sunday. COVID restrictions meant that the parade has not been able to take place for some time, so this year has been extra special for the children, their families and the staff. It’s a highlight of the year here and we’re so grateful to the charity and the bikers for this great event.

“This has been a great week, in the run-up to Easter, with lots going on the keep the children entertained, thanks to funding from Glasgow Children’s Hospital Charity. Our fabulous Play Assistants do lots of crafts and Easter activities with the children.”