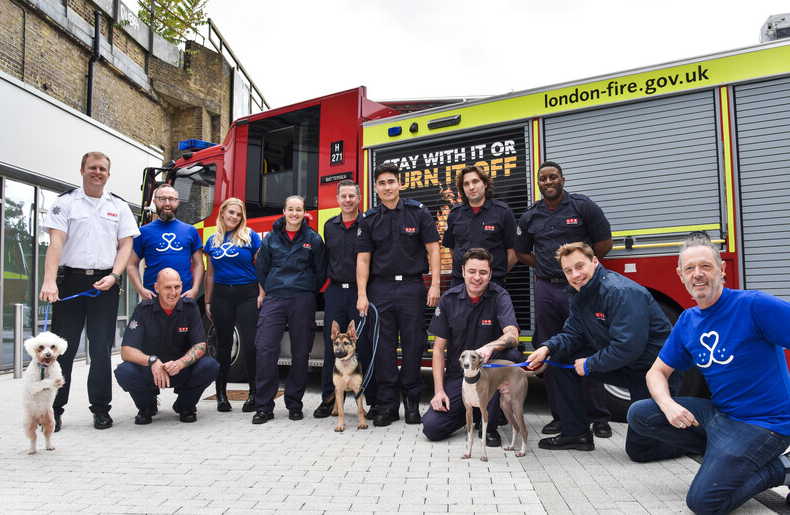 THE animals and staff at renowned rescue charity, Battersea, were left feeling anything but blue after the London Fire Brigade’s Battersea Blue Watch dropped by to show their support for the charity’s new ‘Wear Blue for Rescue’ campaign.

The new campaign was launched to rally animal lovers across the UK to show their support for rescue by proudly wearing a special new ‘rescue symbol’, to celebrate all that makes rescue animals so special, and help spread the word that these underdogs deserve a second chance in life.

“Since we launched our Wear Blue campaign, we have been overwhelmed by the support it has received from animal lovers everywhere. When the Blue Watch got in touch to share their support for rescue, we thought it only right that we show our support in return for all the work that they do, including rescuing animals. What better way to say thanks than by introducing the crew to some of our current loveable residents?”

Each year the London Fire Brigade rescue hundreds of animals, many of which are much-loved pets or strays. This year they’ve already saved 726 animals including 331 cats and 86 dogs, as well as plenty of other animals from horses to birds to goats and even snakes. The Blue Watch’s visit gave the crew a rare chance to meet animals who weren’t in need of saving, all these animals needed were cuddles, games and maybe even a new home. 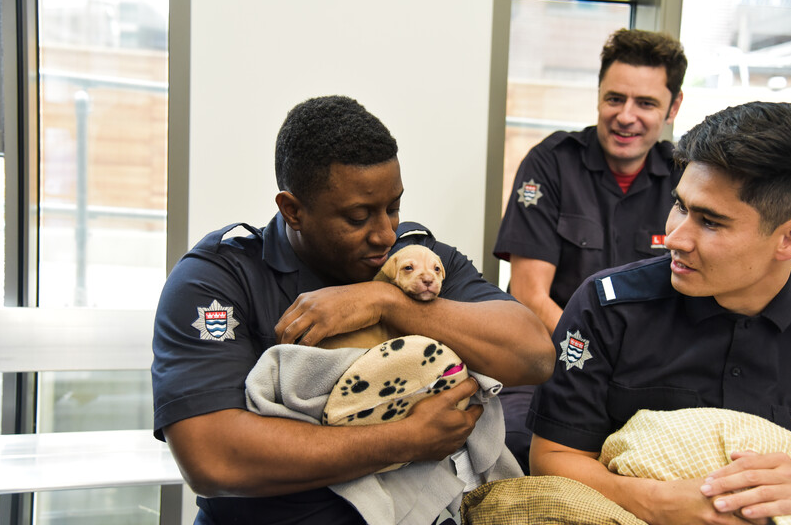 “All of us on Battersea Blue Watch are delighted to be supporting Battersea’s Wear Blue for Rescue campaign. Firefighters love animals too and we are often called to assist distressed or injured animals when our specialist equipment is required. These animals can unfortunately sometimes be strays, so it’s a real comfort to know there are charities like Battersea that are ready to help.

“It was a real privilege to meet some of Battersea’s current residents and see the fantastic work that’s being done there by the wonderful staff and volunteers.”

The rescue dogs lucky enough to spend quality time with the firefighters included Maxwell, an eight-year-old French Bulldog who’s been at Battersea for 163 days; recent arrival Troy, a very lively six-year-old Bichon Frise; young German Shepherd pup Rose, who has a home waiting for her once she’s ready; and delicate Ragu, a four-year-old Italian Greyhound who has already gone to a loving home. As a special surprise, the visitors were also introduced to two of Battersea’s smallest, and arguably cutest, residents – a pair of three-week-old puppies that are being hand-reared by one of Battersea’s many foster carers.

“At Battersea, we’re lucky enough to see every single day just how special rescue animals are. They may not be perfect but they’re certainly worth a second chance at life as a much-loved pet. We invite all animal lovers, whether rescue pet owners or not, to proudly champion rescue and help us make ‘Rescue’ the nation’s favourite breed.”

Anyone can get involved with the ‘Wear Blue for Rescue’ campaign, whether they own a rescue pet or not. People and their pets can show their support by proudly wearing the new Rescue symbol, whether it be on a pin badge, a t-shirt, tote bag or a pet collar tag.

To find out more about the ‘Wear Blue for Rescue’ campaign, please visit: www.battersea.org.uk/wearblueforrescue.