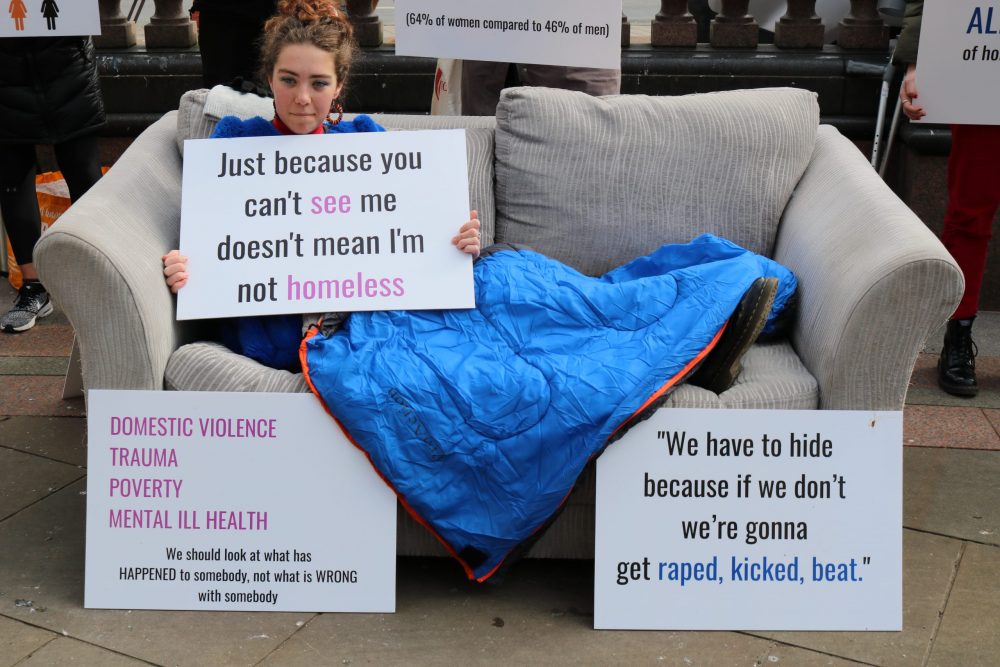 SIMON on the Streets, a West-Yorkshire homelessness charity has changed its name to Simone on the Streets to raise awareness of female rough sleepers ahead of International Women’s Day.

International Women’s Day is a global day held on 8th March each year and the theme for 2022’s campaign is #BreakTheBias.

Simon on the Streets advises that there is a misconception that homelessness is a male-orientated problem, and the day provides an opportunity to share how women are affected and supported.

Official rough sleeping statistics for England released in February 2021, show just 14 per cent of rough sleepers in the UK are women. However, this doesn’t show the whole picture.

Natalie Moran, CEO for Simon on the Streets said:

“Many women who experience homelessness are often hidden from the public, from services and from official statistics. They are more likely to be among the ‘hidden homeless’ as they will make efforts to hide away, often sleeping on sofas, in waiting rooms, public transport and toilets or they stay in exploitative situations and exchange ‘sex for rent’ to avoid sleeping on the streets.”

Studies suggest three in 10 women experience sexual violence while homeless, and nearly one in four female rough sleepers have been sexually assaulted in the past year.

Simon on the Streets, a local charity with a 90% female workforce, advise that 35% of female rough sleepers attribute violent disputes in personal relationships as the reason for them leaving the accommodation.

Louise Lapish, Chair of Trustees for Simon on the Streets says:

“Highlighting female homelessness via Simone on the Streets is a chance for us to tell the real story behind homelessness and the hidden homeless.

“This campaign gives us the chance to focus on the different challenges faced by women and tell their stories. Empathy is key and through campaigns like this we can demonstrate the importance of what we do to our fantastic support network.”

Simon on the Streets works with local people who are affected by homelessness and rough sleeping in Leeds, Bradford and Kirklees.

Established in 1999 Simon on the Streets is an independent charity that relies solely on sponsorship, fundraising and donations. It offers street support to individuals who have complex needs and cannot access mainstream services, due to behavioural issues or mental illness.