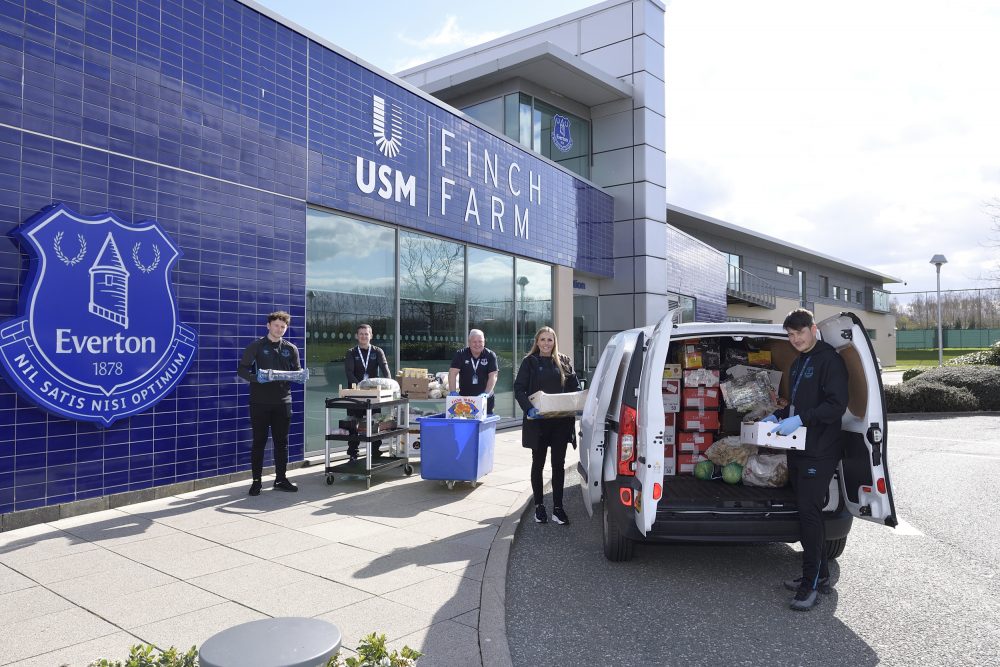 EVERTON in the Community has marked more than one year since the launch of its Blue Family scheme, thanking fans, local businesses and volunteers for their unprecedented support, pledging to continue the vital support for local families.

The charity, part of Everton Football Club, created the initiative at the beginning of the first lockdown last year to help combat social isolation and give much-needed support to some of society’s most vulnerable people.

At a virtual annual conference on Friday, 16 April, Everton in the Community’s CEO, Richard Kenyon, highlighted how Blue Family’s vital work is only able to continue after the Club’s supporters and corporate partners came together during the pandemic.

So far, Everton supporters have contributed more than £400,000 through the Season Ticket refund process when matches were played behind closed doors – a figure matched by the owner, Mr Farhad Moshiri and Chairman, Mr Bill Kenwright – while local businesses have donated approximately £200,000 worth of laptops, clothes, and toys to families.

Among those many companies stepping in to help the charity support those most in need have been online retailer Very; LEGO; catering specialist Relish; and software expert Causeway.

Since the beginning of the first national lockdown in March 2020, Blue Family has helped 29,000 families and individuals, with plans now in place to continue the scheme for as long as local people need the support.

And, as part of the charity’s conference, Richard and the charity’s directors outlined their ambitious plans to develop new programmes that will meet the evolving needs of some of the community’s most at-risk and under-privileged.

“As the whole country continues to reflect on the last 12 months, how the world has changed and what the future holds, it is heart-warming to look at how our fans and local businesses demonstrated real community spirit and generosity.

“Blue Family was initially launched as a temporary measure in response to the huge levels of social isolation and sheer need for help and support among some of society’s most vulnerable.

“But, a year on, we’re still running the services – from welfare calls made by staff and players to emergency food parcel deliveries, the initiative is still going strong and will continue.

“This would not have been possible without everyone coming together and joining forces – whether it’s been cash donations, ticket refund donations or donations of laptops and clothes, we have an incredible network behind us, and we’re extremely grateful for this level of unprecedented support.

“Due to the pandemic, the inequality gap – especially in terms of education and mental health – is widening. But, we are passionate about helping to close this gap and enhance the lives of those in our community, so we’re looking forward to pressing ahead with ambitious and innovative programmes to make sure this happens.”

The Club was recently widely commended in the latest Premier League Fan Survey, with 92% of respondents hailing Everton FC as having ‘supported its local community’ during the last year, while 99% stated the Club makes a ‘significant contribution to the local community.’

The Premier League Fan Survey, which is commissioned by the Premier League to analyse the views of fans in all top-flight clubs, covers matters such as custodianship, sentiment towards the club, and customer service and, crucially, community impact.

Speaking at the conference, which was attended by more than 100 of Everton in the Community’s key stakeholders, Sir John Jones – chair of trustees – said:

“Behind every number you hear is a story of someone who has experienced personal loss, mental illness, social isolation, increased inequality and poverty.

“But, one major positive of the global crisis is the emergence of compassionate solidarity – a sense that we’re all in this together. Supporting us means you are part of an initiative that enables tens of thousands of people to wake up in the morning knowing that today is going to be better than it was yesterday.”

During the pandemic, Blue Family has:

For further information about Everton in the Community, please visit: https://www.evertonfc.com/community.