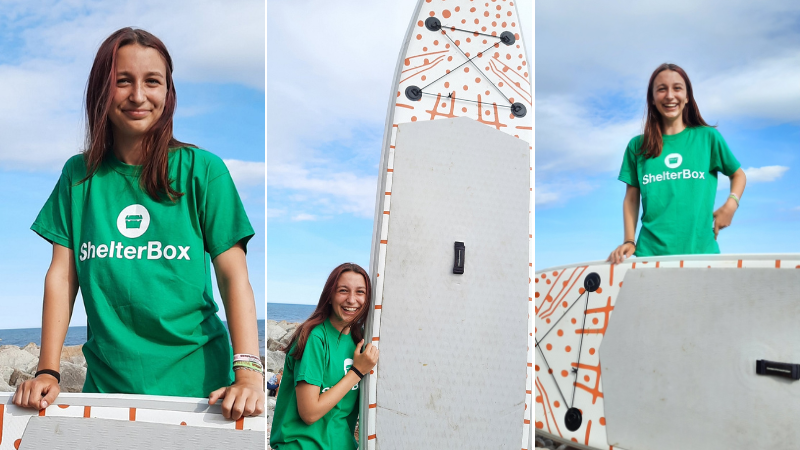 A teenager from Devon is embarking on a mega fundraising challenge during her school summer holidays to raise money for a Westcountry-based disaster relief charity.

Emily Read, 15 will be paddleboarding 220km along the River Thames next month to raise money for ShelterBox, which specialises in emergency shelters.

The international charity is based in Cornwall and provides shelter and other essential items to people all over the world who have lost their homes because of conflict or disaster.

Emily, who lives in Exeter, said:

“ShelterBox is an amazing charity that supports families in crisis in a really practical way.  When I saw so many people fleeing from Ukraine, I wanted to do something to help and knew that ShelterBox would be offering a lifeline.

“I am hoping to raise £1,200, which would be enough for two complete ShelterBoxes full of essential supplies for a family to survive. Although I don’t know which country these will go to, I do know that these boxes will help to save lives and give hope to people in desperate situations.”

ShelterBox is currently working to support people in Ukraine, the Philippines, Yemen, Syria, Cameroon, Burkina Faso, Nigeria, Ethiopia, and Haiti. It has also just sent an assessment team to Bangladesh following some of the worst flash floodings to hit the country.

First inspired to fundraise for ShelterBox after seeing the charity’s stand at the Devon County Show at the age of 10, Emily has already raised thousands of pounds for the charity.

Still in primary school at the time, Emily cycled 500 miles between Land’s End and Lowestoft – from England’s most westerly to the most easterly point. Emily raised more than £7,000 during the two-week long trip in which she battled against wind, rain, and steep hills.

“Emily’s strength and courage to take on these huge fundraising challenges at such a young age to help people around the world that she has never met is incredibly heart-warming.

“Her first fundraising challenge for ShelterBox at the age of 10 was immense, and the Thames paddleboarding challenge is just as impressive.

“Emily will be starting her challenge at Lechlade on Saturday 13 August with the aim of finishing at Teddington Lock, and we’ll be cheering her on all the way.”

“I’m about to take my GCSEs and then thinking about A-levels, which will mean a lot of exams!  But there are so many difficult things going on in the world that I wanted to do something to make a difference for people who aren’t getting those opportunities and are living in dire situations.

“I may not like exams, but world events have made me realise how much we take for granted and I really wanted to do something to help. One box might seem a small thing, but if it means a roof for your family, then that means a lot.

“If you live near the Thames, please feel free to give me a wave to help me keep paddling!”

ShelterBox relies heavily on public donations to fund its responses across the world. Since the charity was founded in 2000, ShelterBox has helped more than two million people across 98 countries.

Anyone keen to find out more about Emily’s challenge or to show their support can visit her JustGiving page. Emily and her family will also be updating her progress on Instagram via @paddle.the.thames.