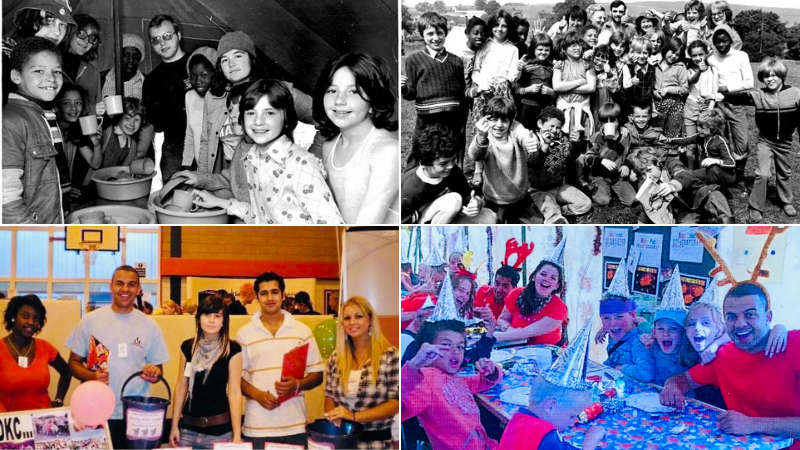 A Derby charity is urgently seeking volunteers so that it can provide a much-needed break to children in the city who may be living in poverty or facing challenges at home.

Derby Kids’ Camp is appealing for help with this summer’s event, which will see more than 300 primary school pupils head to the Peak District for a week of team-building, fun and making memories.

And one of its former volunteers, ex-St Giles School headteacher Clive Lawrence, is urging others to become a Derby Kids’ Camp helper after he was inspired to become a teacher following 10 years involved with the charity.

He was awarded an OBE for services to education earlier this year and has told how volunteering at a city charity inspired him to take up a career in teaching – and why he’s encouraging others to follow suit.

“My mum, Angela, attended Derby Kids Camp in the late 1970s and I know how much she looked forward to the week away. She was the reason I became involved with the charity. I saw it as my way of giving back.

“For the whole week, she would spend time with other people of a similar age, and they’d just have fun; there was a sense of responsibility, too, but mum loved Kids Camp and made so many friends and, most importantly, happy memories.”

It is the first time in two years, since the first UK lockdown due to the coronavirus pandemic, that Derby Kids Camp – which celebrates its 50th anniversary in 2023 – has been able to host the holidays for youngsters.

Clive, who had aspirations of being a teacher from a young age, volunteered for Derby Kids Camp for 10 years before, aged 18, he became camp leader.

Responsibilities as a volunteer included accompanying children on countryside walks, and helping with the weekly talent show and then, when he became camp leader, he would manage and co-ordinate up to 30 volunteers.

Clive, who would often fundraise for the charity in his spare time, added:

“Volunteering for Derby Kids’ Camp is great to have on your CV and for when you’re applying for a university.

“I used to get all of my friends involved; we would do bucket collections, wrote to local companies and even took part in a sponsored bike ride to Skegness.

“I’d strongly encourage anyone who is interested in a career in youth or social work, nursing or teaching, to volunteer for Derby Kids’ Camp.

“I knew that, after spending years volunteering with Derby Kids Camp, that I wanted to work with young people, to make a difference in their lives.

“Volunteering is so rewarding, and it is great to have charity work included on your CV. I would encourage anyone who is considering volunteering with Derby Kids Camp to just do it – the sense of achievement and pride in doing so is a good feeling.”

Derby Kids’ Camp is run entirely by volunteers and provides free holidays for some of the most deserving children in the city and county who are nominated by their school; many are living in poverty or have suffered bereavement, or they may be finding social interaction difficult after the past couple of years and subsequent lockdowns.

Their week at Derby Kids’ Camp – where they get to take part in craft activities, cave climbing and swimming – gives them the chance to try out new activities, explore new surroundings and enjoy being a child.

Children stay in cosy tents that are equipped with comfortable camp beds, complete with bouncy mattresses, snuggly duvets and blankets, and the site has a fully-equipped kitchen with electricity and running water.

“Our holidays help to build children’s confidence and their independence but, more importantly, the children leave with lifelong memories of an amazing and much-needed holiday.

“The camp is set in the beautiful Peak District and we have people who come back year after year.”

The charity is expecting demand for places to be higher than ever this year, given the challenges of the past few years and increasing numbers of families struggling financially and with mental health issues.

“We were seeing increasing demand for the holidays before Covid hit, and we’re expecting this to have grown even more this year. We’d love to be able to offer our full capacity of over 300 children’s holiday spaces, but without the support of a further 50 volunteers we simply won’t be able to do this and some children will go without a much-needed break from the challenges they face.

“We have a ratio of one volunteer to every two children and each volunteer is DBS checked.

“We also have a Cook Team who do a fantastic job in feeding the hungry children and volunteers in our Cook Tent, so if there are any budding chefs out there, then volunteering to join the Cook Team would be a great thing to do.”