TWO friends took on the Copenhagen Marathon to thank the hospital that saved their best friend’s life after he caught COVID-19.

Brian Williams was admitted to his local hospital in July 2021 after suffering from breathing difficulties as a result of contracting COVID-19. He was transferred to St Thomas’ Hospital two months later for specialist treatment in the intensive care unit.

The 36-year-old has XLA (X-linked agammaglobulinemia), an immune system disorder that reduces the body’s ability to fight infections. Despite taking medication for the condition and having the COVID-19 vaccine, Brian suffered a severe reaction to the virus.

“I have never felt as rough as I did. I literally couldn’t move and after 10 days my breathing was really bad and I dreaded going to bed. I never really appreciated how serious it was.”

Once at St Thomas’ Hospital Brian spent nine days in a coma and 47 days on an ECMO (Extracorporeal Membrane Oxygenation) machine, which continuously takes blood from the body, adds oxygen, and removes carbon dioxide and then returns it to the body.

The treatment provides the highest level of life support by temporarily replacing the work of the lungs or heart in patients with severe lung or heart failure, allowing their organs to heal.

Brian started to turn a corner after he became one of the first patients in the UK to receive Ronapreve, a monoclonal antibody treatment for COVID-19.

“I was determined to get better so started learning to walk again while on ECMO. I thought my best chance of recovery was to build up my strength and use my lungs.

“I was quite scared to move from ICU to the ward because I was worried something would go wrong but the nurses were wonderful. I hadn’t been outside for three months so one of them even wheeled my bed outside next to the River Thames.” 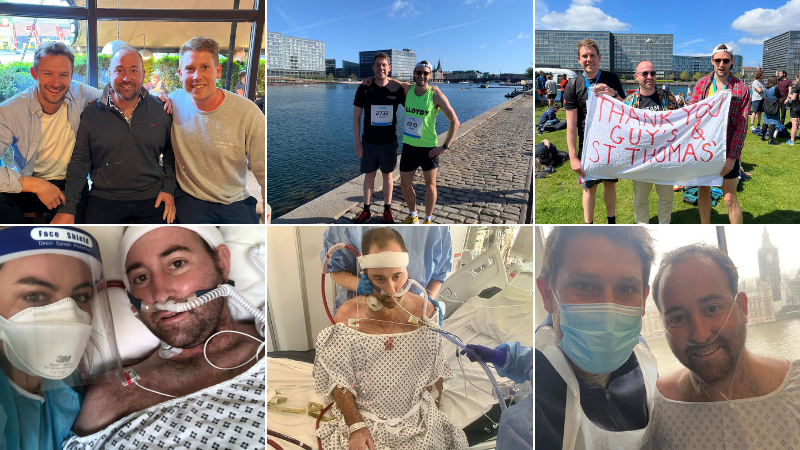 “The fact I’m still here today is all down to the incredible staff and exceptional care I received. I owe the nurses, doctors and therapists everything and feel extremely fortunate to have been given ECMO treatment which no doubt saved my life.

“The staff supported me physically and psychologically and were there for chats at 3am when I couldn’t sleep – without them, it would have been impossible. I’ve seen what they go through in a 12-hour shift and then they go home and come back to do it all again. They saved my life and nothing will ever match what they did for me, but I want to try and give something back in any way I can.”

Brian’s best friends Lloyd McMillan and Matthew Lloyd took on the Copenhagen Marathon on Sunday 15 May to raise money for Guy’s & St Thomas’ Charity. They achieved their target times – sub-four hours for Lloyd and an incredible sub-three hours for Matthew.

“Such was the severity of Brian’s condition, if he didn’t have the absolute best possible care he wouldn’t be here today – it was amazing to see the commitment and unrelenting energy of everyone caring for him.

“The staff at Guy’s and St Thomas’, and the extraordinary technology we’re fortunate to have access to in the UK, saved our friend’s life. We know that anything we raise can and will help to save someone else’s.”

The trio met while working in Dubai around seven years ago and Brian was due to be an usher at Lloyd’s wedding.

“When Brian caught COVID-19 he deteriorated relatively quickly and we were all becoming increasingly worried, which was around the same time as my wedding. It was a shock to see just how sick he was, he didn’t look like the Brian that went into hospital.

“It’s very clear that Brian’s still here because of St Thomas’ so it was a no brainer to try and give something back to make sure the next person gets to leave hospital like he did.”

“I had a very bad four months but it’s not going to define me. I’m honoured that Lloyd and Matt have chosen to raise money for Guy’s & St Thomas’ Charity.”

Dr Dan Taylor, an intensive care and ECMO consultant at Guy’s and St Thomas’, helped care for Brian. He said:

“Brian has made a remarkable recovery and it’s a credit to him and his motivation that he’s done so well. Having a patient walk around while on ECMO to rehabilitate is quite unusual and it took a lot of mental power and strength for him to do that.

“Brian had the best therapy available to him at the time and was the first patient at St Thomas’ Hospital to get the Ronapreve drug as soon as it was approved, which was particularly important for his underlying immune condition. It’s quite incredible what Brian and his friends are doing for Guy’s & St Thomas’ Charity and we are extremely grateful.”