A leading children’s brain tumour charity, Tom’s Trust, has launched its 7 wishes campaign to coincide with The Big Give Christmas Challenge 2021.

The campaign features seven Christmas wishes from children affected by brain tumours and their families. The campaign, launched by Chief executive Rebecca Wood, includes a video created by the charity to help people understand a little more about the charity’s work. The video is narrated by 11-year-old Riley Akers, from Kelvedon in Essex. Riley was diagnosed with a brain tumour in March 2018 and has been supported by the charity since then.

The ‘7 Wishes’ campaign aims to raise the profile of the charity and invite donations up to 7th December. Tom’s trust has set an ambitious target of £5,000 which will then be matched up to £10,000 by our generous backers.

Debs Mitchell, who co-founded Tom’s Trust in 2011 after losing her son, Tom to a brain tumour, said:

“Christmas can be an especially hard time for families who have recently been told their child has a brain tumour, going through treatment or living with the loss of a child.

“We wanted to launch this campaign to raise awareness of what children are experiencing every day – not just at Christmas – and know that every single wish will resonate with people for different reasons. We’ve launched the campaign this week to coincide with The Big Give as it is a great fundraising opportunity for us too.

“With every pound we raise this week being matched by our donors, we’re hoping that we can easily reach our target and that the funds raised will continue to help the children and families we support.” 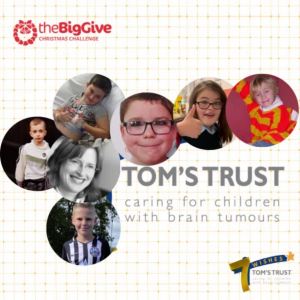 My wish is for Tom’s Trust to open a new centre in the UK next year sometime, so we can offer essential psychological support to children diagnosed with brain tumours and their families. By donating to Tom’s Trust during The Big Give Christmas Challenge week, we’ll be one step closer to that wish becoming a reality.

Freddie is an 11-year-old boy from Gosforth, Newcastle. The year Freddie was diagnosed his family were planning a dream trip to Florida but, understandably, had to cancel the trip.  Rebooking this trip would mark a significant milestone in Freddie’s recovery and is something the family wish for every year. Watching Freddie face so many everyday struggles, his mum Jenny wishes more than anything for him just to lead a normal adult life.

Camille is a gorgeous 14-year-old girl from Woodbridge, Suffolk, who wishes she could be more independent and do things by herself. Camille was just over two years old when she was diagnosed.

Independence is something every child craves and often takes for granted but with 62% of children having life-altering disabilities following treatment, such as blindness, hearing loss, or loss of motor function often this independence is taken away or certainly put on hold.

Henry is a fun-loving little boy from Bury St Edmunds in Suffolk. His wish is that he could stop the scans.

Emma is an ambassador for the charity after being supported and treated at Great North Children’s hospital and has one wish – to see her friends again who lost their lives to cancer.

Jamie is a soon to be teen from Camborne, Cambridgeshire who found out days before his 8th birthday that he had a brain tumour; the news every child and parent dreads.

Each year is such a milestone and it is now an amazing 5 years since Jamie had his tumour removed. The annual MRI scan naturally falls at the same time each year overshadowing what should be one of the most exciting days in a young boy’s year.  A scan that is so full of hope but an equal measure of fear and dislike.  The actual scan itself is a daunting experience but waiting for the results is all-consuming, overshadowing all else that is going on in your life as you wait on tenterhooks for the results.

Jamie would love to have a year when all he has to think about is his birthday, the party, the presents, the friends, rather than worrying about his results.  The normal we all take for granted is the one thing our families crave.

Nothing ever prepares you for losing a child. Or for coping with life afterwards.  Not least as a father where, whether through society or generation, there is often an added expectation that you will be the strong one and as life returns to ’normal’ those natural questions that pepper our conversations suddenly become a minefield. Through our programme, our support doesn’t stop when the treatment ends as we are fully aware that life afterwards is even harder.

Andrew, Tom’s father, is sadly only too aware of this but it is his and his family’s own personal experience and very real understanding which is at the heart of the support we offer our children and their families. Living on the precious memories that were too often taken for granted but would now be the most treasured. Andrew’s wish would be to have one more Christmas with Tom.