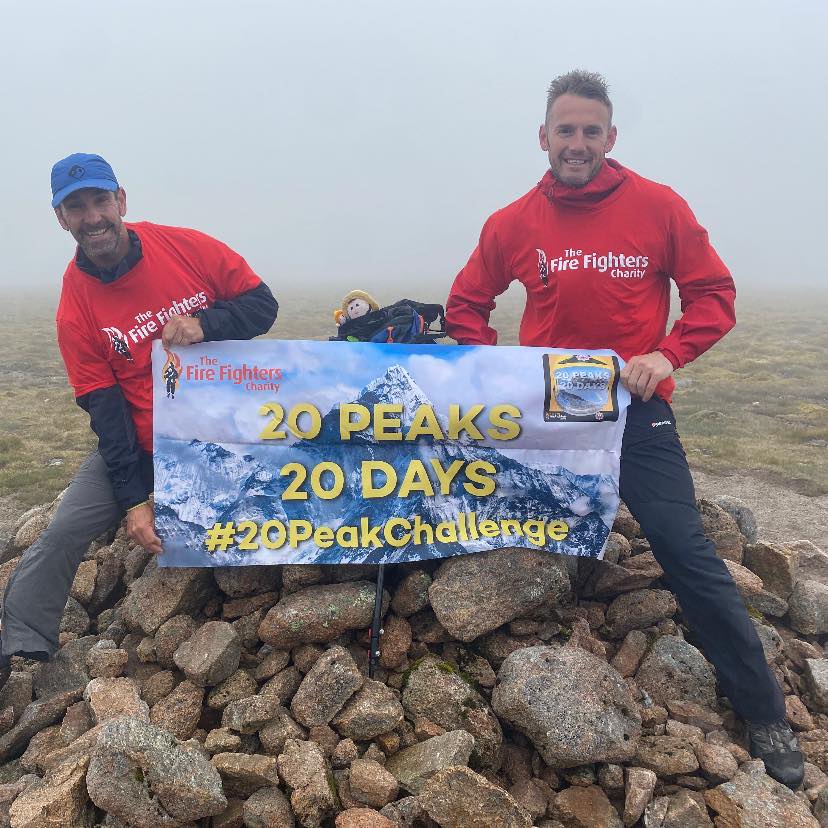 A firefighter from Hampshire and Isle of Wight Fire and Rescue Service is recovering at home and being supported by The Fire Fighters Charity, after suffering a sudden heart attack midway through a fundraising challenge.

Firefighter Sean Ratcliffe, 52, was joined in June by his colleague Jason Haste, 40, as the pair took on a challenge to climb the 20 highest peaks in the UK in under 20 days.

Both men trained hard for the two-week event and had passed their operational fitness test as firefighters, just weeks before.

However, after completing the 15th peak and resting for the night in Aviemore, Scotland, Sean collapsed without any warning or prior symptoms – with paramedics confirming he’d suffered a heart attack.

“If we’d been up a mountain at the time, we’d have been in big trouble.

“We decided between us, especially given I was doing the walk for mental health reasons, that I should continue the challenge while Sean was recovering. I’d drop in daily for a few hours to see him, and continue with the final peaks.”

Sean, who is a wholetime firefighter at Gosport Fire Station and an on-call firefighter at Eastleigh fire station, is thankfully now recovering well, but it’s meant he’s facing a long stint off work and – having reached out to The Fire Fighters Charity for support with both his physical and mental health before – he knew exactly where to turn for help.

The Charity supports serving and retired fire and rescue service personnel, their dependants and other eligible members of the UK fire services community, with their health and wellbeing throughout their lives.

“I’ve actually had help from the charity three times. The first was around 1999 when I broke my wrist. I went to Jubilee House, the charity’s centre in Cumbria, and it was absolutely brilliant, it really helped my recovery.

“I then got in touch in 2008 for assistance, after I lost everything – including my house.

“And finally in 2010, we lost two firefighters in the Shirley Towers fire. I was quite involved, but it wasn’t until a year later that I realised I was really struggling and I was referred to Harcombe House, the charity’s centre in Devon, for a recuperation break in 2011 – just to get away.”

Sean is now being supported by the charity’s Welfare Team as he faces time off work to recover at home.

Jason, meanwhile, completed 19 peaks in under 14 days but decided to leave the last one to instead help Sean return to his family as soon as possible. Together, and with the support of another colleague, Scott Avery, they’ve raised over £1,800 for The Fire Fighters Charity.