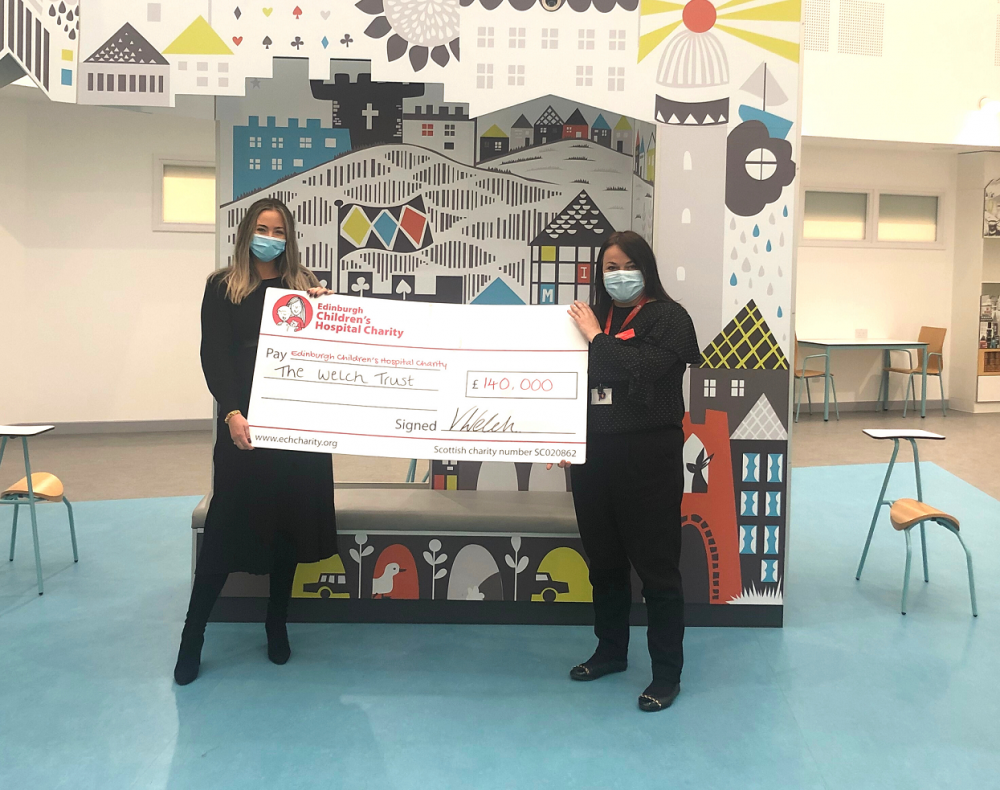 CHILDREN and young people living with severe epilepsy in Scotland will have the life-changing chance to be seizure-free, thanks to the funding of a world-class laser coming to Edinburgh’s new children’s hospital.

A partnership between the Welch Trust, Edinburgh Children’s Hospital Charity (ECHC) and NHS Lothian is bringing MRI-guided Laser Interstitial Thermal Therapy (LITT) for Edinburgh’s Royal Hospital for Children and Young People (RHCYP) – the first time this laser technology will be available in Scotland.

LITT is a new and proven, minimally invasive treatment that uses a laser to remove brain tissue that is causing seizures. Children and young people who will be referred for laser surgery are diagnosed with refractory (medication resistant) epilepsy; they may experience severe and frequent ‘drop down’ seizures, up to 100 in one day. In appropriately selected cases, laser surgery can stop seizures entirely and cure the child’s epilepsy.

LITT surgery treatment is currently only available at Great Ormond Street Hospital (GOSH) and in Houston, Texas. The laser equipment will be part of the Scottish National Paediatric Epilepsy Surgery Service, based at the RHCYP in Edinburgh, meaning children will come to the capital from all over Scotland to have the surgery.

The current surgery choice practiced in Edinburgh is open brain surgery, which lasts around seven hours, has a longer recovery time and results in a scar across the top of the child’s head. The LITT precision technology will reduce this surgery time to around two hours, is much less invasive and has a shorter recovery time. It is expected that up to six children a year could benefit from the laser surgery, aged from infants to adolescents, with a similar number of adults also benefitting annually.

Following a request from the National Epilepsy Surgery Service to ECHC to support this initiative, the charity identified the Welch Trust as the ideal funder and agreed a partnership to make this project a reality.

“We are very proud to be able to gift this LITT technology to the new Royal Hospital for Children and Young People. As a Paediatric Nurse, I understand the importance of having the best equipment in the hospital to expedite the curing of patients with complicated conditions and ultimately save lives.

“When we were made aware of this need, we didn’t have to think too long about it. Our focus continues to be to invest in high impact programmes that save lives or significantly improve the quality of life for very sick or terminally ill children. We look forward to continuing our partnership with the Edinburgh Children’s Hospital Charity and expanding our support across other areas of critical care.”

“With the new children’s hospital now open, we are thrilled to have partnered with the Welch Trust to bring the world-class LITT equipment to Scotland for the first time.

“It is always very satisfying for us to be able to join with another funder who have a similar desire to support the hospital with projects that will transform children’s health.

“Having the laser surgery available in Edinburgh gives families more choice in their place of care and means they will no longer need to endure the financial and emotional cost of national or international travel and separation at a very stressful time. It will also place Edinburgh and NHS Lothian on the map as a world-leading provider of epilepsy surgery and treatment.”

“Across NHS Lothian, we continually look at new and emerging technology and treatments to see how they could benefit our patients. We are delighted that through the support of both the Welch Trust and Edinburgh Children’s Hospital Charity, we will be the first in Scotland and only the second location in the whole of the UK to offer LITT surgery.

“Severe epilepsy can be very difficult to live with and puts an enormous strain on families. Having a world-class cutting edge treatment option available here in Lothian, which is both less invasive and which reduces recovery time, will make a huge difference to the lives of children and their families across Scotland. This treatment really does have the potential to transform lives, and our teams at the Royal Hospital for Children and Young People are delighted that they will soon be able to offer it as a treatment option.”

The new laser equipment is compatible with the intra-operative MRI suite at the RHCYP. It is expected to arrive in summer 2021, followed by a period of intensive training prior to the first surgery taking place.