PIERS Morgan has left his role as a presenter on Good Morning Britain, ITV has announced.

The announcement comes after broadcasting regulator Ofcom launched an investigation after receiving more than 41,000 complaints regarding comments made by the presenter following Harry and Meghan’s interview with Oprah Winfrey.

Mental health charity, Mind had spoken of their disappointment over the ongoing public onslaught of Meghan Markle by Mr Morgan. 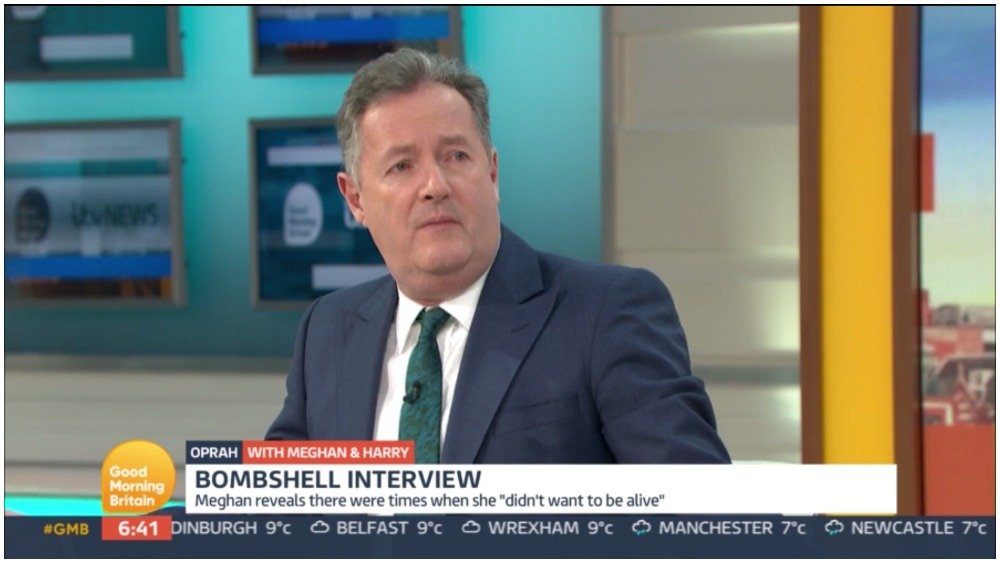 In a brief statement, the broadcaster said:

“ITV has accepted this decision and has nothing further to add.”

During the ‘interview’, Meghan revealed that she ‘did not want to be alive anymore.’ Piers Morgan went on live television the next morning and rather than address the comments’ seriousness, Mr Morgan said: ‘I don’t believe a word she says, Meghan Markle. I wouldn’t believe her if she read me a weather report.’

It follows days of Mr Morgan’s Twitter timeline being dominated by anti-Meghan and Harry rhetoric.

The behaviour prompted a statement by Mind, the mental health charity, who said: “It’s vital that when people reach out for support or share their experiences of ill mental health that they are treated with dignity, respect and empathy.”

“We were disappointed and concerned to see Piers Morgan’s comments on not believing Meghan’s experiences about suicidal thoughts.

“It’s vital that when people reach out for support or share their experiences of ill mental health that they are treated with dignity, respect and empathy.”

Mind’s decision to intervene was very telling because it is a supporter of ITV’s mental health campaign, Get Britain Talking.

It was a view shared by UK Charity Week Founder & Charity Today Executive Editor Lee B. Rayment, who is himself a mental health ambassador, he said:

“It saddens me that we have people in such privileged and public roles that can make a real difference with mental health, and instead, these institutions and personalities choose not to do so; in fact, they make things worse.”

“I would add, to her credit, Piers was immediately rebuked by his co-presenter Susanna Reid. Whether you believe Meghan’s side or not, I think we can all agree that the British media never seems to learn from history. We had Caroline Flack, the hounding of Diana and countless others. You cannot say you support mental health on your channel and then allow this kind of ignorance on a primetime tv show.”