Charity collaboration is just the ticket to advance suicide prevention 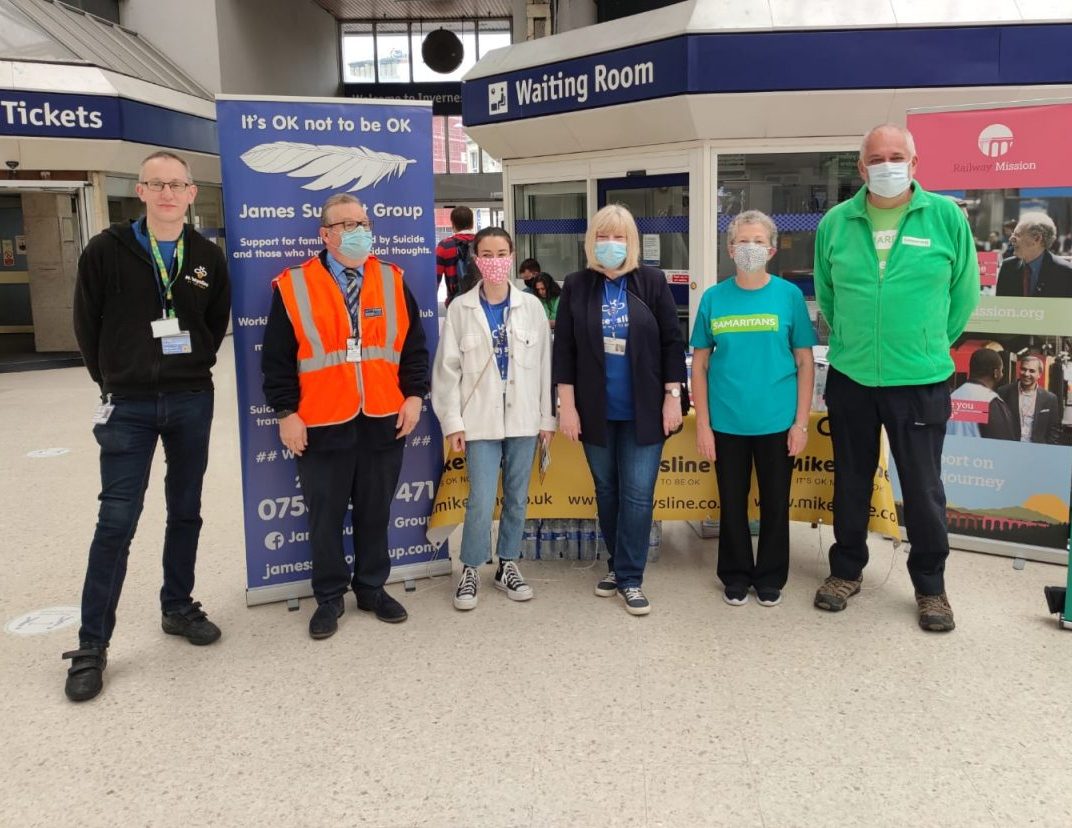 Volunteers manned pop-up stalls in Wick, Thurso, Inverness and Nairn stations – and at Nairn County’s Station Park – to highlight the support available to those struggling with their mental health in the Highlands.

Onboard Conversation Cafés were also held on trains running between Inverness and Elgin, allowing travellers to speak about any issues that might be causing them distress.

“It’s a sad truth that suicide rates in the Highlands are higher than anywhere else in Scotland, so we are delighted to be teaming up with mental health organisations across the region to educate people on the support available.

“As we adjust to post-pandemic life, many people are facing new stresses in their personal and professional lives. Over time, these can accumulate and start to feel overwhelming – but it’s important to recognise that it’s ok not to be ok, and that help and advice is available.

“It was fantastic this weekend to see volunteers from organisations across the Highlands teaming up to spread the word about the incredible mental health support that is available here, and to connect with commuters and passengers who might otherwise not have reached out for help.”

“Signs of suicide can be difficult to spot which is why we should take all signs of distress seriously. These events provided an opportunity to acknowledge that suicide is preventable and that it is everyone’s business.

“Talking openly about their feelings can help a person get clarity about what is troubling them. You do not need to have a solution to their problems, but a listening ear can make a positive difference. This shows that you care and that their welfare is important to you.

“If you are worried about someone, such as a neighbour, friend, colleague, or even a family member, ask them directly about their feelings. We all need to work together across sectors and organisations to identify and support people in distress and direct them to further sources of support that could save their life.”

This weekend’s activity in the Highlands builds on a history of onboard suicide prevention events run by train operator ScotRail.

“With so many people these days struggling with mental health issues, it’s really important that we reach out to make a difference. The Conversation Cafés onboard our trains are a great way of starting to talk to someone who might be vulnerable or feeling low.

“We’re really proud of our ScotRail staff who, along with volunteers from partner organisations such as Mikeysline, are chatting to passengers to raise awareness about mental health.

“It’s not counselling, but it does give those we speak to the confidence to ask their friends and family ‘how are you?’ as well as clear information about where they can get help for themselves and others if they need it.”

Since 2015, Mikeysline has offered confidential, non-judgemental support to people of all ages with mental health issues or in emotional distress in the Highlands via a text line service at 07786 207755, as well as via live chat, Twitter and Messenger. The charity also offers face-to-face support from three Hives across the Highlands – at its Inverness headquarters; at Tesco in Tain; and at Am Bothan Community Café by Skiach, Evanton. The charity has also this year launched a dedicated young person’s support service.