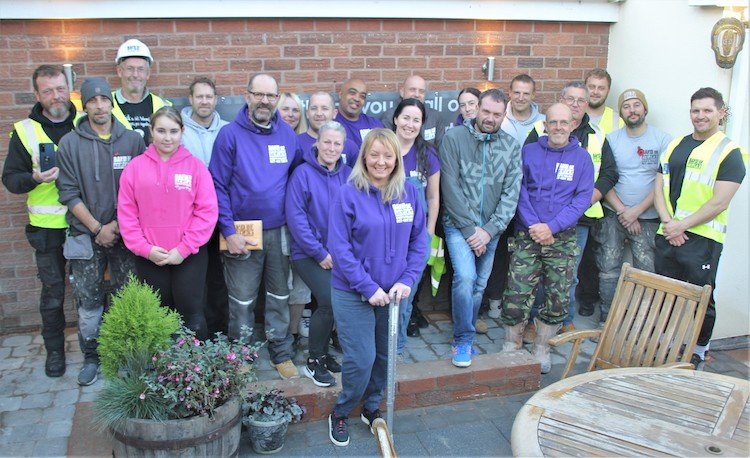 Charity Band of Builders (BoB) called on its network of tradespeople to help by completely revamping the ground floor of Cher Little’s home in Connah’s Quay, Flintshire. A new extension was built – which has significantly increased the size of the living area – and a new low-level kitchen and wet room have been added, as well as refitting Cher’s bedroom. Doorways have also been widened with ramped access outside to make the home wheelchair accessible and give Cher more independence.

A renovation on this scale – which involved knocking down an existing extension and building a new, larger one – would normally take up to four months, but the team from BoB completed the project in just 31 days. Cher was left speechless when the charity handed her home back for her to move back into.

“I couldn’t imagine how it was going to be – but this is absolutely incredible, and I can’t thank all of the volunteers enough for what they’ve done in giving me loads of living space.

“It’s been a real struggle, but Band of Builders has given me my freedom back and I can be happy again.”

Cher, 46, fell ill on her birthday in October 2020, initially thinking she might be suffering from coronavirus. Her condition deteriorated over the following days until her partner Mark, a plasterer, dialled 999 when she fell seriously ill. Paramedics saved Cher’s life outside her house. She was rushed to hospital, where she was put on life support. There, medics told the family that Cher had contracted meningococcal septicaemia – a rare and often fatal bloodstream infection – and had gone into septic shock.

Cher’s family were told she only had a 20% chance of pulling through, as her organs had started to shut down, but after a three-and-a-half-month battle, the mum of two survived. However, Cher was told she would need to have both legs amputated below the knee – an operation she underwent in February 2021.

Cher is now learning to walk again using prosthetics but relies on a wheelchair for a lot of her movement. Her condition meant she was confined to the living room in the family’s home and had little privacy or freedom to move around.

It was Cher’s sister Sian Lloyd who initially contacted BoB, a registered charity that completes practical projects to help members of the UK construction industry who are battling illness or injury. The charity is backed by major names within the construction industry.

Kevin said this is the charity’s 20th project to date – and the most ambitious yet – and he’ll never forget Cher’s reactions as she saw what the BoB team had achieved in 26 days.

“It was a privilege to be part of this project and to see how much it means to Cher and her family. I’m immensely proud of the work we’ve done to totally change Cher’s home and have the satisfaction of knowing the difference that it will make to her life – and that of her family.

“At any one time, there were 10–15 tradespeople onsite, and it was also a real privilege to work with a fantastic group of committed people who answered the call for help and gave their time for free to work on this project.”

Kevin also praised the efforts of the local community in Connah’s Quay, who rallied around with support – including a Mold-based contracting firm which paid for skips and a grab lorry and supplied an excavator and manpower; local takeaways that delivered food; and a nearby pub, the Halfway House, that lodged BoB volunteers in rooms free of charge.

“Cher’s life has been irreversibly changed by her condition, and she was confined to one room in the house, with little privacy. We’re hoping the changes that have been made will help improve not only her quality of life but the whole family’s, as well as help them move forward after what has been an incredibly difficult time.

“The project has been our biggest to date, with our amazing volunteers coming from across the country to help Cher and her family. We have fantastic support from the industry, and charity partners have also donated much-needed materials. This is all the more remarkable after a year in which the construction industry has endured rising prices, supply chain disruption and staff shortages.”