Charities work in tandem to make a wheel difference for veterans 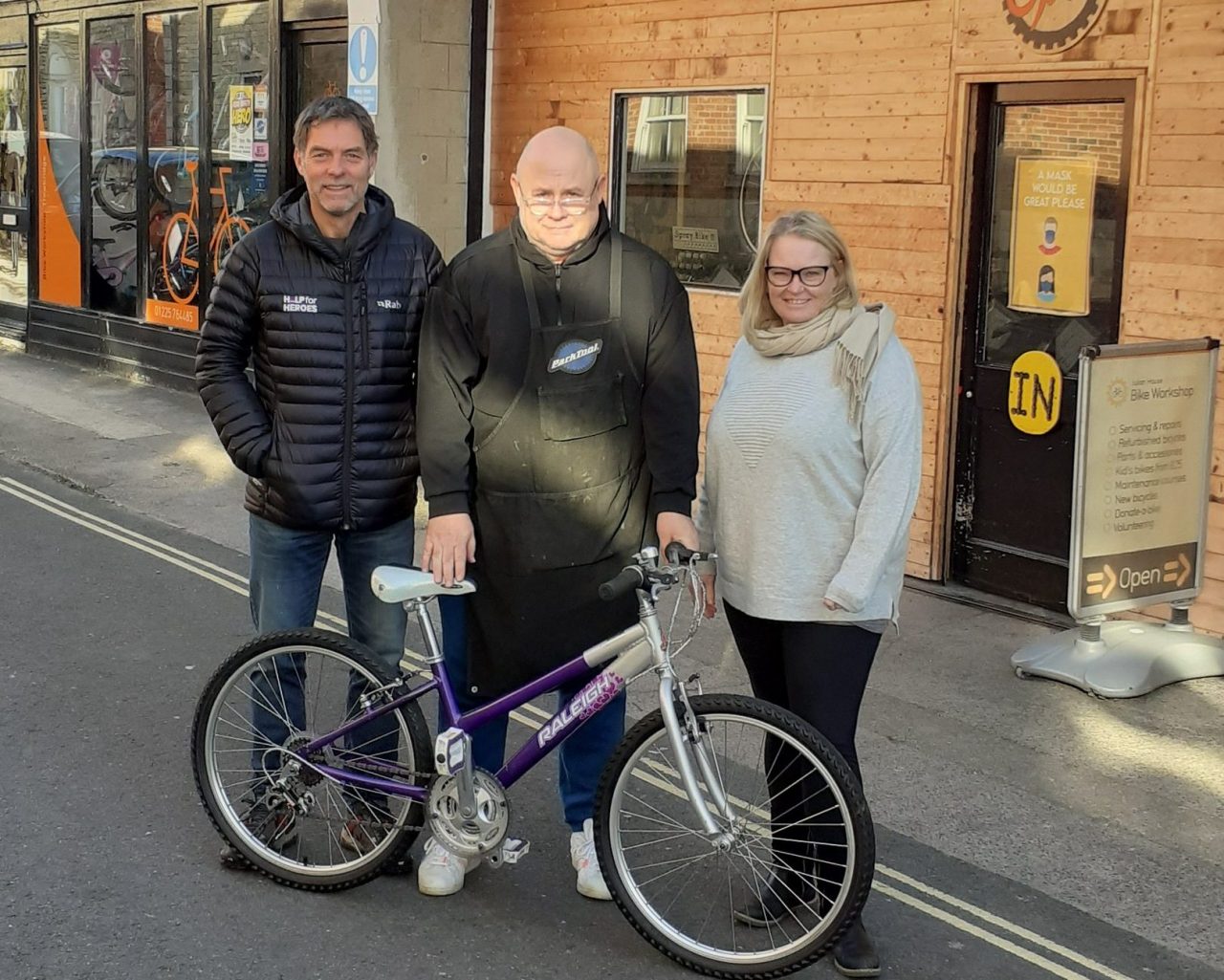 TWO charities have joined forces to offer Armed Forces veterans the chance to ‘get back in the saddle’ with a bike-building training course.

Help for Heroes and the Bath-based homeless charity Julian House have completed a pilot project in which former Army Air Corps pilot Karl Tearney, 55, from Trowbridge, learned how to repair and reassemble a cycle over a four-week period at the town’s Julian House’s Bike Workshop.

Julian House was established more than 35 years ago to help address homelessness in Bath and now has specialist teams to help people with homelessness, addiction, criminal behaviour, domestic violence, unemployment, and learning difficulties.

Its build-a-bike project started 10 years ago and is designed to create opportunities for vulnerable people to train, gain confidence and get a positive lift back into independence and employment, all while providing customers at its shops – in Bath and Trowbridge – reliable, good value bicycles and maintenance.

For Tearney – who suffers from PTSD – it proved to be a resounding success and he hopes it will lead to many more Help for Heroes veterans undertaking the course.

“I’ve never really known how to fix a bike properly – apart from changing an inner tube. You select a bike and take it back to bare metal, rebuild it and it’s yours to keep. I already had a bike so I chose a children’s bike so the charity could sell it for Christmas.

“The staff there are incredibly kind, enthusiastic, and very savvy. One of them was fixing customers’ bikes, and, conscious of my condition, every time he had to use the compressor, he would come over and advise me first and ask if I was going to be OK with it making sudden noises.

“They were very enthusiastic about bikes but also passionate about passing on the knowledge to us. I was sharing a workbench with an 18-year-old, chatting away, it was almost like sitting there with my son.

“It might sound soppy, but it was just nice to know that people cared about me and cared enough to think the course would be really good for me. And there’s a real sense of achievement when you’ve built the bike. It’s given me the confidence to be able to make repairs on my own bike when required. It was really good to be learning in a kind, caring and welcoming atmosphere.

“I can’t see any reason why any veteran would not want to participate if offered the opportunity. They shouldn’t hesitate; just go there and get the show-round and you’ll realise how good it will be for you.”

Tearney had responded to an offer to get involved from Help for Heroes’ Sport, Activity and Fellowship (SAF) team, in the south, and he was supported throughout the experience by both SAF practitioner Steve Burrows and Geraldine Roast, the employment support lead for Julian House.

“Karl was amazing. He’s just completed his course. He had a love of bikes anyway and he loved being part of the team. They welcomed him and he was a great help with the younger clients, giving them advice and feeding back to them.

“He was there for his own personal reasons, but they looked up to him because of his military service and related to him in that, despite his background, he can still suffer from mental health issues. The rapport between them was excellent.

“The build-a-bike project is about getting people back into the workplace, and building on their self-esteem and self-worth, giving them something meaningful to do and making them feel included in society rather than excluded. They come in and build a bike, which they can then take away or we can sell in our shops.

“I’d like to get more Help for Heroes veterans on board. Karl didn’t need a bike, for him it was just about refurbishing the bikes for us to sell for the charity. He really liked that the benefits were going both ways. It’s good that we can reach out now to veterans, through Help for Heroes, to let people know these courses are available.”

Four further veterans have signed up for the project through Burrows and Help for Heroes and start their courses soon.

Help for Heroes believes those who serve our country deserve support when they’re wounded. Every day, men and women have to leave their careers in the Armed Forces as a result of physical or psychological wounds. The Charity helps them, and their families, to recover and get on with their lives. It has already supported more than 26,500 people and won’t stop until every wounded veteran gets the support they deserve.

For further information on Help for Heroes, or to get support, please visit: helpforheroes.org.uk. To discover more about Julian House’s Bike Workshop or to donate a bike to the project, visit jhbikeworkshop.org.