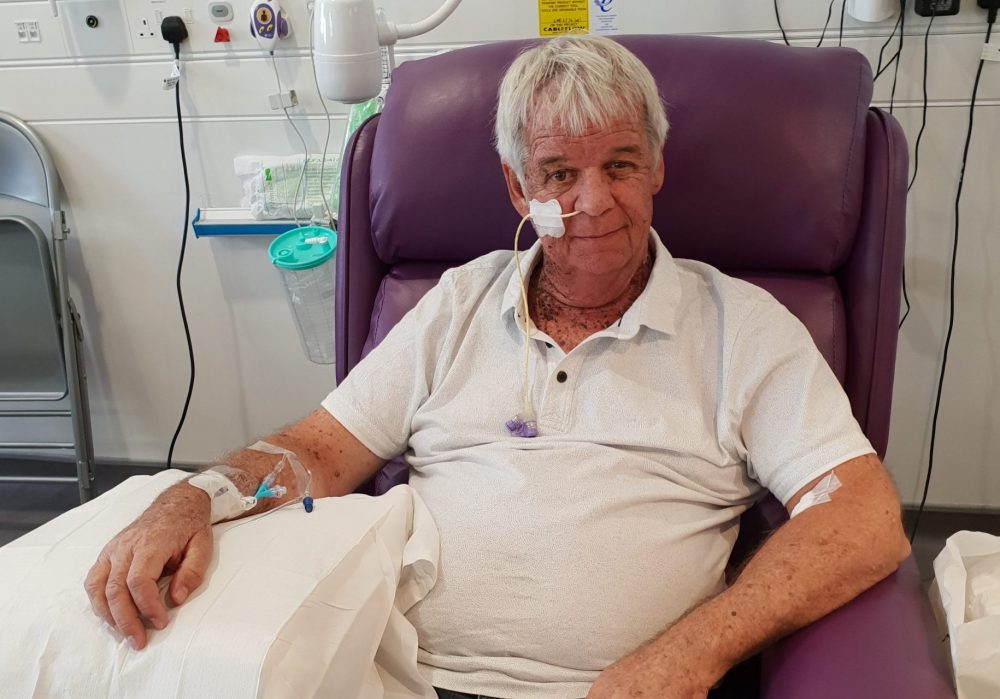 A retired Sidcup man is inviting the public to dare him to take on different fundraising challenges, while he raises awareness for a lesser-known form of cancer.

Geoff May, 63, is aiming to complete 22 different fundraising activities throughout the year to raise money for Guy’s Head and Neck Cancer Centre, part of the Cancer Centre at Guy’s.

In May 2018, after visiting his GP following a persistent sore throat, the former company director received the difficult news that he had cancer in his tonsil. Geoff said: “I didn’t even know you could get cancer in your tonsils and I’d never heard of head and neck cancer before. I didn’t know the signs or what to look for, so I would have continued to ignore it had the doctor not sent me to an ear, nose and throat specialist to have it looked at.”

Geoff said: “When I was first told I had tonsil cancer, I was in a bit of a state of denial. It wasn’t until I saw Dr Teresa Guerrero Urbano, my oncologist at Guy’s, that it began to sink in.”

Dr Guerrero Urbano told Geoff more about his cancer, including the probable causes and his treatment options. He soon began a course of chemotherapy once a week and radiotherapy every weekday for seven weeks.

The gruelling treatment left Geoff barely able to speak and eventually he couldn’t eat or swallow, meaning he had to be fed via a tube. He also had to be hospitalised numerous times due to a series of infections.

A few months after his chemotherapy and radiotherapy finished, he was given the news that the treatment was a success and he was cancer-free.

He said: “It was an incredible thing to hear. Knowing that enduring it all was worth it was such a great feeling.

“There was still a long way to go in terms of my recovery and though I finished the treatment in July 2018, I could only begin to eat again in late 2019. It wasn’t until May 2020 that I began to feel more like myself. That was when I was able to eat without the tube and when I began exercising.”

Determined not to fall back into the lifestyle he led before his diagnosis, Geoff began to make positive changes to his life. He said: “In some ways, I feel like cancer saved me. Before I was diagnosed, I was the director of a company and completely stressed out. I drank too much, ate unhealthily and was just generally living a life that wasn’t good for me. But after cancer, I have a much healthier lifestyle. I feel like I’ve got my life back.” 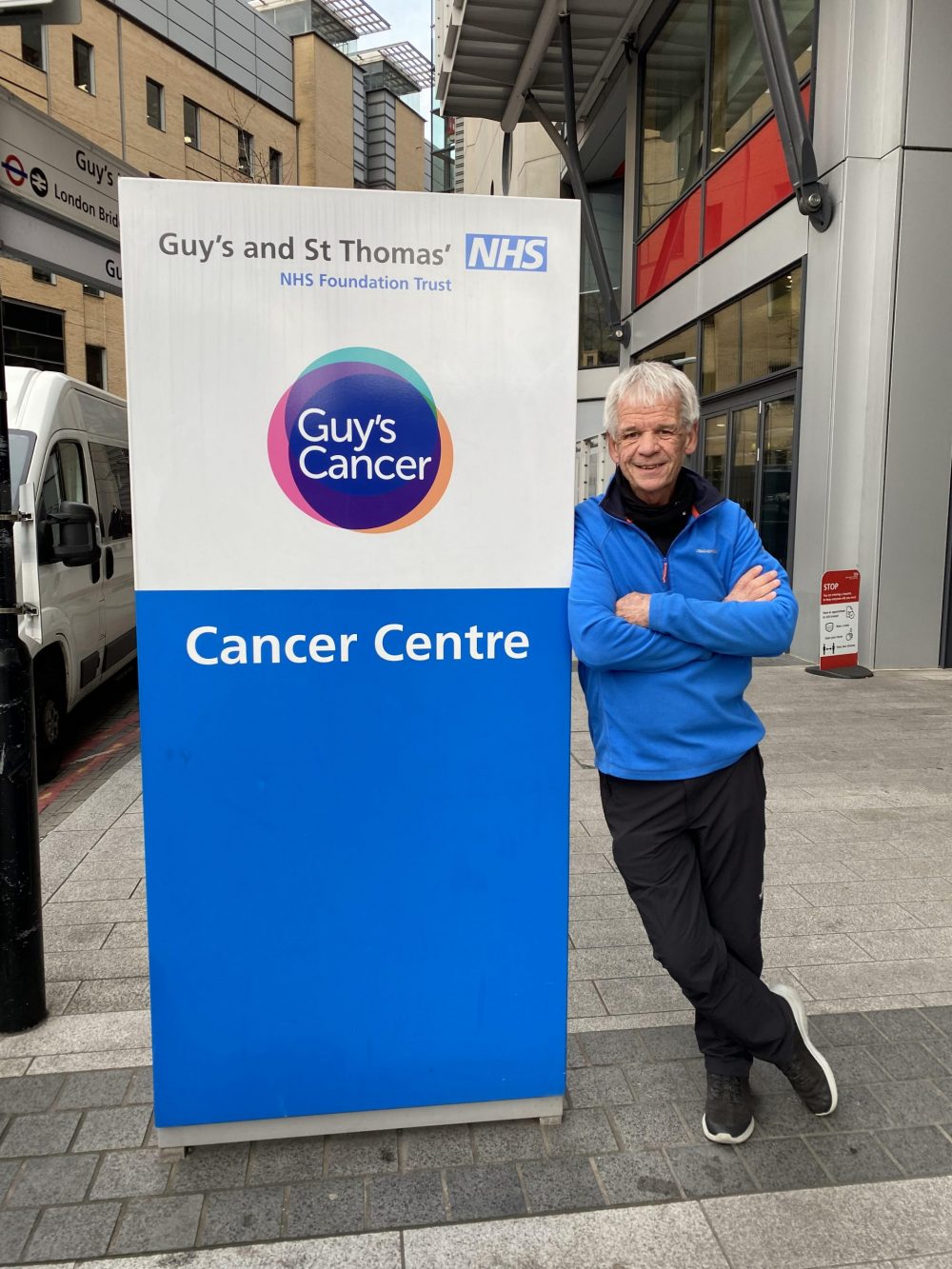 Guy’s Head and Neck Cancer Centre has launched last year thanks to donations to Guy’s Cancer Charity. The centre brings together a diverse range of programmes to offer patients the best possible care. The centre aims to speed up the diagnosis for head and neck cancer patients and improve the ways they are treated for their condition by minimising side-effects, maximising treatment effectiveness and reducing rates of recurrence.

In 2021 the head and neck cancer team took on a series of fundraising challenges to go towards caring for their patients. Geoff felt so inspired that he decided to take on a challenge of his own.

Geoff said: “What the team did was amazing and really got me thinking about what I can do to help. I thought of a few challenges that I could do, but what I want is for people to dare me to do something. I’m asking people to bring their friends and family along, join in the challenge if you want, and I’ll use the opportunity to talk to them about head and neck cancer.

“It’s as much about spreading awareness of head and neck cancer as it is about raising funds. I’m keen to tell people the signs of what to look out for and how you can check yourself for mouth cancer. I also hope that me doing this might give hope to patients who are currently being treated for cancer.”

He added: “I’ve got a few challenges that I’m doing over the course of the year. This includes walking a total of 750km, cycling 1,250km and swimming 22km as well as spending 150 hours in the gym. I’ve also started doing some that people have challenged me to do, including joining some conservationists to clean up some local woodland, taking on a climbing wall for the first time and taking on England’s longest zipline.”

Geoff has some upcoming events that he is encouraging others to take part in or come along to cheer him on. These include a 12-mile walk from Guy’s Cancer at Queen Mary’s Hospital, Sidcup, to the Cancer Centre at Guy’s in London Bridge on 20 March (World Oral Health Day) and a challenge to visit all 10 Royal Parks in London, by foot or on public transport, on 27 July (World Head and Neck Cancer Day).

For Geoff, taking on these challenges is one way to show his appreciation for the team who cared for him. He said: “Dr Guerrero Urbano was just incredible and I don’t know what I would have done without the clinical nurse specialist Sarah Cleary. The rest of the team are the unsung heroes; the radiologists, the speech and language therapists, the dieticians, the physio, everybody has been absolutely fantastic. I can’t say thank you enough.”

Dr Teresa Guerrero Urbano, a consultant clinical oncologist, said: “Geoff is an incredible individual who has turned something that has been so difficult into something truly amazing. To embark on a year-long fundraising journey to raise money for Guy’s Head and Neck Cancer Centre means so much to the whole team here and we’re hugely grateful.

“Despite advances for head and neck cancer patients, there are many people who are unaware of head and neck cancer which can lead to late diagnosis. Having someone like Geoff who is raising awareness about head and cancer, as well as showing the impact that successful treatment can have on a patient is so inspiring.”

Geoff is keeping a diary of his fundraising challenges on Facebook. You can donate by visiting JustGiving.

Geoff’s tips for ways you can check for mouth cancer: