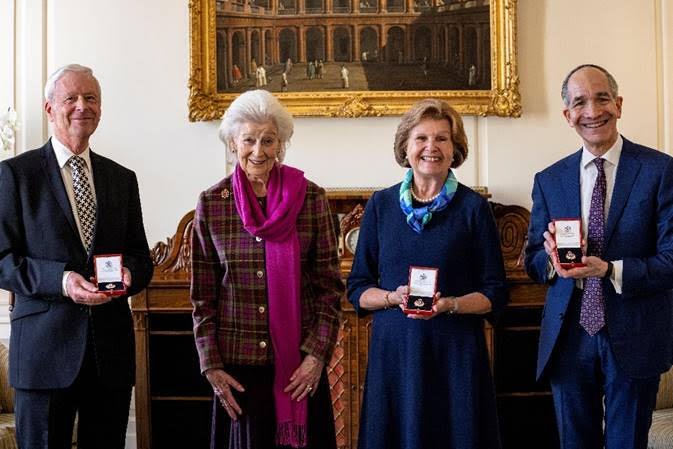 Three dedicated humanitarians from the British Red Cross have been awarded the prestigious Queen’s Badge of Honour at a presentation ceremony at St. James’ Palace, London.

In the intimate ceremony, Her Royal Highness, Princess Alexandra, Vice President of the British Red Cross, awarded Rosie Gutteridge MBE JP DL, Michael Meyer OBE and Paul Taylor the honour, to commemorate their committed service to the organisation and their humanitarianism.

The Queen’s Badge of Honour is the British Red Cross’s highest honour and is awarded for exceptional service of the highest order to the organisation or to the International Red Cross and Red Crescent Movement.

The Royal Family have a longstanding relationship with the British Red Cross, dating back to 1870 when Queen Victoria became the charity’s first Patron. Today, Her Majesty The Queen is Patron whilst The Prince of Wales is President.

David Bernstein, CBE, chair of the British Red Cross board of trustees said

“On behalf of everyone at the British Red Cross, congratulations to our staff and volunteers who have received the Queen’s Badge of Honour Award. The British Red Cross relies on our network of staff and volunteers to support those in crisis at home and abroad and we are so proud of the service that Rosie, Michael and Paul have given to the organisation. We would like to thank them for their years of dedicated service.”

The British Red Cross has been providing support to those who need it most, no matter who or where they are for over 150 years. The Red Cross and Red Crescent Movement is the world’s largest humanitarian network with thousands of dedicated volunteers and staff on the frontline of supporting those in crisis.

Find out more about the work of the British Red Cross and visit www.redcross.org.uk.

Rosie has been a fundraising volunteer for the British Red Cross for almost 40 years and was appointed the charity’s President for Cambridgeshire in 2011.

Over the years, she has helped raise hundreds of thousands of pounds including £110,000 at an Armistice Centenary dinner hosted by Rosie at Trinity College Cambridge in 2018.

Rosie remains passionate about raising the profile of the British Red Cross in the face of an ever-increasing number of deserving charities locally and nationally.

On being given the award, Rosie said: “It has always been a huge privilege to serve as a volunteer in a variety of roles with the British Red Cross and so I am overwhelmed and deeply honoured to receive this award.”

Over a 39-year career thus far, Michael Meyer has made an extraordinary contribution to the British Red Cross and the Movement.

Michael is responsible for or has contributed substantially to, many significant achievements, including the UK’s ratification of the 1977 Additional Protocols to the Geneva Conventions, the founding of an internationally renowned biennial summer school on International Humanitarian Law (IHL) at Cambridge University, and support for the creation of the UK’s National Committee on IHL.

Michael’s extraordinary expertise in both international law and the statutes and governance of the Movement has been instrumental in guiding and shaping the Movement’s approach to a range of humanitarian law and policy issues.

Of what receiving the award means to him, Michael said: “I have now worked as a staff member of the British Red Cross for 39 years and was a volunteer before that.  From a young age, growing up in California, I have been motivated by public service.  I have always seen my Red Cross/Red Crescent work as a form of public service, and as a vocation.  To have my service recognised by the British Red Cross in this way is highly appreciated and satisfying.  I have long admired the dedicated service of Her Majesty The Queen. To receive an award with her approval and name is also especially meaningful and valued.”

Paul has been a long-standing volunteer and a Trustee for the British Red Cross, giving countless hours of his time to the organisation. During his time as an Emergency Response Volunteer, Paul contributed to a series of major projects for the British Red Cross which led to changes in structure within the services to reach a greater number of beneficiaries whilst improving cost-effectiveness.

Paul said: “Since beginning my volunteer journey in the early 2,000’s I have felt privileged to meet and work with many British Red Cross staff members and volunteers.

Whilst serving on the Board as a Trustee and Vice-Chair I have been fortunate enough to represent the BRC internationally, attending the IFRC bi-annual meeting in Sydney, Australia, spending time with the Sierra Leone Red Cross and serving on an IFRC working group in Geneva.

Hearing that I had been awarded The Queen’s Badge of Honour came as a complete surprise. It is a great honour that will always be a potent recognition of the incredible work undertaken by our British Red Cross staff and volunteers here and around the world alongside our IFRC and ICRC partners.”