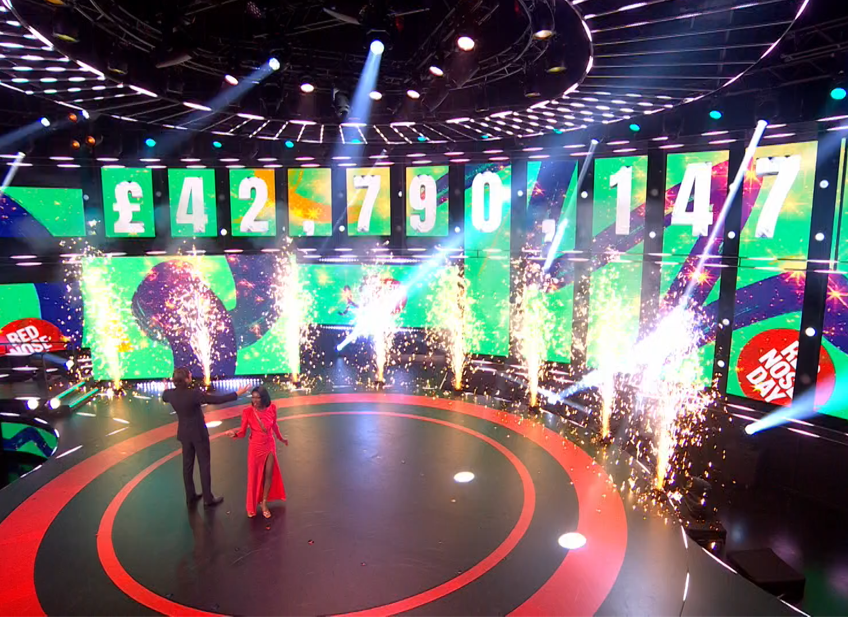 THE British public has once again shown overwhelming kindness and generosity as a staggering £42,790,147 has been raised for Red Nose Day 2022, with money still coming in, taking Comic Relief fundraising past the extraordinary milestone of £1.5 billion raised since the charity began.

The donations have never felt more needed, as millions of people across the country struggle with the rising cost of living as we recover from the pandemic, and the devastating crisis in Ukraine has left everyone shocked and saddened.

Every donation, no matter how big or small will help change lives. Money raised by Red Nose Day this year will support people in the UK and around the world to live free from poverty, violence and discrimination, and support people with their mental health. Some of the money will also go to organisations providing essential support for people in Ukraine affected by the terrifying conflict and supporting Comic Relief’s extensive funding to help refugees in many parts of the world.

The Red Nose Day Show was broadcast live on BBC One and BBC iPlayer from Salford for the very first time, and viewers were treated to a star-studded line up of comedy and entertainment presented by Alesha Dixon, David Tennant, Paddy McGuinness and Sir Lenny Henry.

“Doing Red Nose Day right now, when times are truly difficult, makes me think – this is exactly why we set it up. Comic Relief has been built on the urgent need to help people in crisis and right now donations are needed more than ever. Seeing families, friends, kids, teachers and colleagues come together to help raise this incredible amount of money is remarkable. To still donate despite the challenging time we are in, shows the kindness of our country. To the British public and our fantastic partners, we thank you for your generosity and your wonderful willingness to fundraise for us. You’re making life-changing work possible, here on our doorsteps and around the world.”

The action-packed evening saw reigning Strictly Come Dancing Champions, Rose Ayling-Ellis and Giovanni Pernice, take to centre stage the floor, performing their wonderful waltz to Ellie Goulding’s ‘How Long Will I Love You’. Viewers were also mesmerised by a spectacular rendition from the cast of West End musical ‘& Juliet’, as performers sang their hearts out with a medley of hits, putting a sensational spin on the iconic love story, all in support of Red Nose Day.

Also exercising their vocal cords were stars Helen George, Nina Wadia, Rosie Jones, Scarlett Moffatt, and Tamzin Outhwaite, who bravely took on a medley of three Aria’s from the opera Carmen, stunning the audience with a live performance at The London Coliseum, in the return of Comic Opera. The all-female line-up sung in force, with support from Sara Cox and the award-winning Chorus and Orchestra of the English National Opera.

Two very special guests, Dawn French and Jennifer Saunders were back on screens tonight, paying a visit to Jay Blade’s Repair Shop in a never seen before sketch. The hilarious cameo left viewers in stitches, before treating them to an unexpected appearance from national treasure Dame Judi Dench, who couldn’t resist joining in the skit. Also entertaining the British public was the legendary Stephen Fry, who told a tongue in cheek tale strictly for the grown-ups, full of home truths about the daily battle of getting the kids to nod off at bedtime, that every parent could relate to.

“Every year, we see how people come together, have a much-needed laugh and raise money for Red Nose Day, knowing the huge difference it’s going to make to so many people.

“Nights like tonight make me so proud to be involved. It’s an incredible reminder of how people up and down the country and everyone at home go above and beyond to raise a truly amazing amount of money. So, thank you for your phenomenal kindness and generosity.”

Over on BBC Two, Comic Relief at the Movies celebrated when Comic Relief has turned to the world of film, from special appearances by greats such as Bond, Bean and Borat though to pinpoint parodies of film favourites. The Red Nose Day fun then carried on late into the evening back on BBC One with the return of The Great Comic Relief Prizeathon for the second year running on BBC One. Hosted by AJ Odudu and Vernon Kay, viewers were given the chance to win a series of brilliant prizes including a vintage Beetle, a holiday and Glastonbury tickets. Entries are still open, and the full line-up of prizes can be found online at: comicrelief.com/prizes.

“I’m incredibly proud to see such generosity from the British public this Red Nose Day. The past six weeks have seen so many people come together across the entire country to help change lives – from schools to people buying Noses and T-shirts, to all our brilliant fundraisers, and of course, the people watching the show tonight. We want to say a huge heartfelt thank you to every single person who has helped raise such a phenomenal amount of money. All donations will help us fund vital mental health and domestic abuse work, tackle homelessness and poverty head-on, and support organisations working in Ukraine. Your support has never felt more needed, thank you.”

This evening of fun and laughter marked the end of this year’s Red Nose Day campaign, which has seen:

The work of Comic Relief wouldn’t be possible without the support of its amazing partners who have pulled out all the stops to support Red Nose Day at a time when so many are facing difficulties of their own. The biggest thank you goes out to Sainsbury’s, TK Maxx and Homesense, The KFC Foundation, British Airways, Walkers, MALTESERS®, Babybel, The LEGO Group, The Bill and Melinda Gates Foundation, The Foreign, Commonwealth & Development Office (FCDO), The Health Foundation, Department for Digital, Culture, Media and Sport (DCSM), National Emergencies Trust, Esmée Fairbairn Foundation, Unbound Philanthropy, and the Scottish Government.

The whole night of television is available to stream now via BBC iPlayer.

You can still donate to Red Nose Day, if you feel you are able to, by visiting: comicrelief.com/rednoseday.