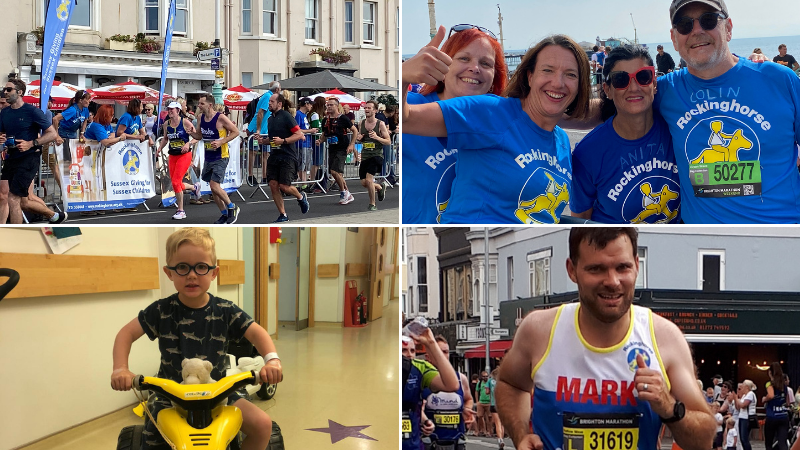 BRIGHTON welcomed back runners and supporters to the city for this year’s Brighton marathon.

Over 12,000 thousand runners took part in the Brighton Marathon last weekend, raising money for many charitable causes including Rockinghorse. The Brighton based children’s charity had eight participants taking part in the race that takes place around the city, beginning in Preston Park and finishing on Madeira Drive.

Together they raised over £9,000 which will be used towards a range of projects that the charity is currently fundraising for.

These include specialist equipment to help transfer premature babies from the maternity ward to the Trevor Mann Baby Unit, distraction toys for children waiting for treatment at the Royal Alex A&E department and art therapy sessions for young people living with chronic medical conditions.

After the disruption and postponement of the previous events, the organisers of this year’s marathon put in place a range of measures aimed at keeping runners, volunteers and spectators safe. Along with staggered arrival times and social distancing measures, there was careful planning to avoid supporter congestion and increased sanitation facilities.

But none of these measures dampened the spirits with the runners all being really pleased to be able to take part once again in this popular event.

Mark from Hove was one of the participants running for Rockinghorse, clocking up a time of just under 5 hours and raising nearly £2,000. He supported the charity after his four-year-old son Ethan was looked after at the Alex.

“A couple of days after Ethan was born, he had to be taken back into intensive care as he was suffering from sepsis. It was touch and go for about 24 hours and he was in hospital for a couple of weeks after that, but luckily, he came through.

“More recently he had a hernia operation at the Alex and drove himself to theatre in one of the Rockinghorse funded cars which I thought was a great idea. Being Brighton born and bred I was aware of Rockinghorse but seeing it first-hand made me realise all the work that they do.”

This was Mark’s first marathon and despite the tiredness afterwards, he really enjoyed the experience:

“I’m not an elite runner, I just wanted to finish but I’m really pleased to have come in under 5 hours. Before lockdown, I had never run more than about 5km but when I was stuck at home running was the only exercise, I could do so I started running longer distances. One day I ran about 9 miles and decided that I could probably do a marathon distance if I did the training.

“The race itself was tough but an amazing experience, especially running in my hometown. You dig deep and get through it and the crowd was great – it’s an experience I’ll never forget.”

Lucy Pond, Challenge Fundraising Manager at Rockinghorse, was there to support the charity’s runners from a cheering point at the Old Ship Hotel on Brighton seafront.

“What a day! This was the first marathon event that has taken place in Brighton since February 2020, and it was absolutely wonderful to be able to be here to cheer everyone on and enjoy the atmosphere.

“And thanks to the incredible support from our runners, we’ve raised over £9,000 for some much-needed projects and equipment throughout Sussex.”

Rockinghorse is now looking to recruit supporters to take part in their Santa Dash along Hove seafront and Santa Drop from the i360, both taking place on Saturday 11 December.

So, if you’d like to dress up as Santa and run, or abseil, to support the charity, check out the ‘Events’ section on their website at www.rockinghorse.org.uk or contact them on 01273 330044.