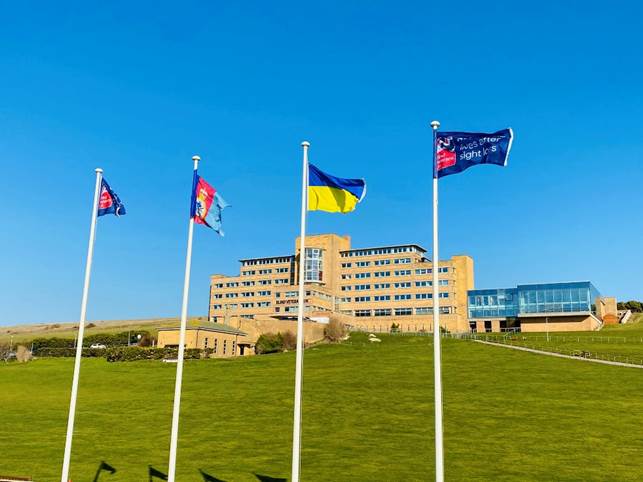 THE charity Blind Veterans UK has announced that it has completed the process to update its Articles of Association. These changes mean Blind Veterans UK can now provide their specialist vision-rehabilitation support to those affected by war-like activity, including terrorist activities.

One consequence of this is the charity is now able to support the people of Ukraine by offering its expertise in both design and delivery of vision-impaired (VI) rehabilitation to those who have sustained blindness through war-like activity.

Before this, Blind Veterans UK’s constitution meant it was only allowed to support veterans who had served in or on behalf of the British Armed Forces with the exception of Emergency Service personnel sight loss who lost their sight on duty.

“All at Blind Veterans UK have been deeply moved by what we have seen and heard in Ukraine over the last few months and I have had messages from staff and beneficiaries who have been in touch to ask what we can do.

“Building on our long history of providing specialist vision rehabilitation to those who have been blinded through war, the Blind Veterans UK Council is also determined to provide support to the people of Ukraine.

“Rapid action has been taken to amend our Charity Articles of Association to support this intent. The changes mean we can now provide our specialist vision rehabilitation support to those affected by war-like activity, including terrorism.

“Therefore, we are now able to support the people of Ukraine as well as others by offering our expertise in both design and delivery of VI rehabilitation to those who have sustained sight loss through war-like activity.

“We have seen figures that suggest many injured Ukrainian soldiers are suffering with facial injuries and, as world leaders in vision rehabilitation for the war blind, we want to do all we can to help.”

The Government of Ukraine has made a written request to Blind Veterans UK as well as their research sister charity BRAVO VICTOR to provide specific support to their people.  This has been enshrined within a memorandum of understanding (MOU) signed by each of the three parties.

Blind Veterans UK and BRAVO VICTOR work in partnership with VI and veteran organisations to complement and sustain their long-term offer of support to Ukraine.

The two charities aim to provide support in the following areas:

The charity will seek separate funding to help make this intent a reality for the people of Ukraine and elsewhere. Nick Caplin added:

“We will ensure our fundraising for vision-impaired ex-Service men and women of the British armed forces is not compromised through any new activities.

“We are Blind Veterans UK first and our priority will always be supporting those British ex-Service men and women regardless of when they served or how they lost their sight.”

Blind Veterans UK currently supports 4,000 blind veterans across the country but knows there are up to tens of thousands more who still need its support to rebuild their lives after sight loss.

If you, or someone you know, served in the Armed Forces, including National Service, and are now struggling with sight loss, then please get in touch. Call 0800 389 7979 or visit blindveterans.org.uk/support