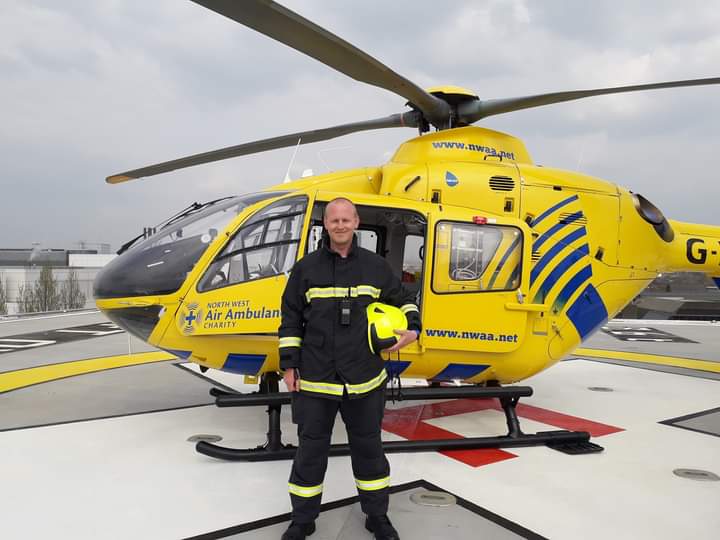 A HELIPAD officer won’t be switching off from work when he takes on the Manchester Marathon – he’ll literally be carrying it with him.

Andrew Ledwith has signed up to run the 26.2mile route wearing his 4kg firefighter uniform, complete with helmet and fire-protective tunic and trousers – the equivalent of carrying four large bags of sugar!

He’s taking on the challenge to raise money for Royal Manchester Children’s Hospital Charity. Andrew’s role as Helipad officer at Manchester University NHS Foundation Trust’s new Helipad at the roof of Grafton Street Car Park means he’s learned just how vital both the Helipad and specialist teams at the children’s hospital are in those critical moments when patients are brought in via helicopter.

“The children’s hospital looks after a staggering 280,000 paediatric patients every year, and being a father myself; it does bring home what an amazing job they do at the hospital.

“I feel that if I can help those kids by raising money by running this marathon, then this will go a long way to support not only the young ones but their families as well.

“My brother Daniel who had Duchenne Muscular Dystrophy, was treated at the old hospital site in Pendlebury. Sadly, he passed away, but the care he received there was excellent.

“I’m one of four helipad officers, and two of us are on the Helipad at all times while it is operational. We see the young patient transfers, and if you’re coming in via the Helipad, you’re usually in a critical condition. My job plays a small part in helping them quickly get the medical care they need, but I wanted to do something more.”

Andrew has been working at the Trust since September 2020, and the Helipad became fully operational to take patients in May 2021. The Helipad construction was made possible thanks to generous fundraisers who raised £3.9million for the Manchester Foundation Trust Charity’s Time Saves Lives Appeal.

Before working at the Trust, Wigan resident, Andrew was formerly an aircraft handler in the Royal Navy. Fans of Channel 4’s A New Life in the Sun may also recognise Andrew and his wife Samantha, as they were featured on the programme when they moved to the southwest of France.

Since returning to the UK, Andrew has completed some marathons for charity but decided he needed to put a new spin on things this time around.

He said: “I’ve done a few marathons before, so I think asking people for money when you’ve already done one can be quite hard. That’s why I decided to make this one more difficult by doing it in my uniform.

“I am cheating slightly – I decided not to run a whole marathon in the fire boots as they are really heavy, and I think the 4kg fire suit will prove to be hard enough so that I will be wearing trainers. I’m not that crazy!”

Andrew, a father to two-year-old Tobias, has already started training and is using a weighted vest to get him used to the extra layers and kilos he’ll be wearing on the big day.

“Because everything is fireproof, it’s incredibly hot,” said Andrew. “So it’ll not only be heavy, I’ll be sweating buckets too. But it’s for charity, so I can’t back out now!

“I’ve averaged between 3hr 30 and 4hr 20 marathons over the years, but I think the main focus this time is to get across the finish line. To do this, I will have to take in lots of nutrition, salt tablets and plenty of water to compensate for all the sweating. I want to finish at 4hr 30, but that’s a big ask, so I think under 5hr would be more realistic. But let’s see what happens on the day.

“What I really want is a cool day but without any of the famous Manchester rain – the rain would add extra weight.”

Manchester Marathon, this year taking place on 10th October, is famously one of the flattest marathon routes in the country and is popular with runners trying to get a personal best. Although own places are now filled, those wishing to take part can still apply for charity places. Manchester Foundation Trust Charity is keen to hear from anyone wishing to have a charity place and raise money for their favourite Manchester hospital.

This autumn, the marathon is one of many events on offer with Manchester Foundation Trust Charity under the Be A Good Sport initiative. The Charity’s Be A Good Sport campaign encourages fundraisers to get active and do something amazing for one of the NHS hospitals in the Charity’s family – including the Royal Manchester Children’s Hospital Charity that Andrew is supporting.

“There might be people out there thinking they’re too late to sign up to Manchester Marathon, but there are still places available if you sign up with us and raise some money for a wonderful cause.

“This is a great opportunity – it’s flat, it’s in a cooler month and don’t worry, we won’t make you wear a fireman’s uniform! Normal running gear is very much encouraged.

“We want to say a big ‘thank you’ to Andrew for taking on the challenge for our Charity and being one of our fantastic Be A Good Sport fundraisers. Of course, if a marathon sounds too daunting, we’re also offering 10K events bother locally and further afield and the ever-popular Tour de Manc for our keen cyclist supporters. You can visit the Be A Good Sport section of our website to find out more and sign up today.”

Royal Manchester Children’s Hospital Charity funds treatment, research and care projects. The Charity aims to make a real difference to the children and young people in their care by ensuring they continue to receive the highest quality treatment in the highest quality facilities.

For a guaranteed free place at the Manchester Marathon and to raise money for any of the 10 hospitals in the Charity’s family, www.mftcharity.org.uk/events