THE launch represents a substantial investment of more than £30million by the charity over the next seven years. It is the culmination of an 18-month project to modernise and replace the Derbyshire, Leicestershire & Rutland Air Ambulance (DLRAA), and Warwickshire & Northamptonshire Air Ambulance (WNAA).

The charity is calling on the communities the aircrafts serve to show their support as the charity builds on the 42,000 plus missions it has attended since its launch in 2003.

The new aircraft was launched from Sywell Aerodrome in Northamptonshire, home of aircraft provider and project partner Sloane Helicopters Limited, before flying to their respective homes at East Midlands Airport for DLRAA and Coventry Airport for WNAA.

“These wonderful new aircraft are the culmination of a lot of hard work by our supporters, the charity and our stakeholders, and I am very proud to see it come to fruition and of all those involved in making the dream a reality.

“The difference the charity’s two new helicopters will make to the tens of thousands of lives they will touch, directly or indirectly, over the next seven years is very significant, and that’s what this charity is all about.

“For us now though, the hard work really begins. Our crews are available, 24/7, 365 days a year, but we need the support of the public more than ever before so we can continue to deliver our lifesaving, frontline critical care.” 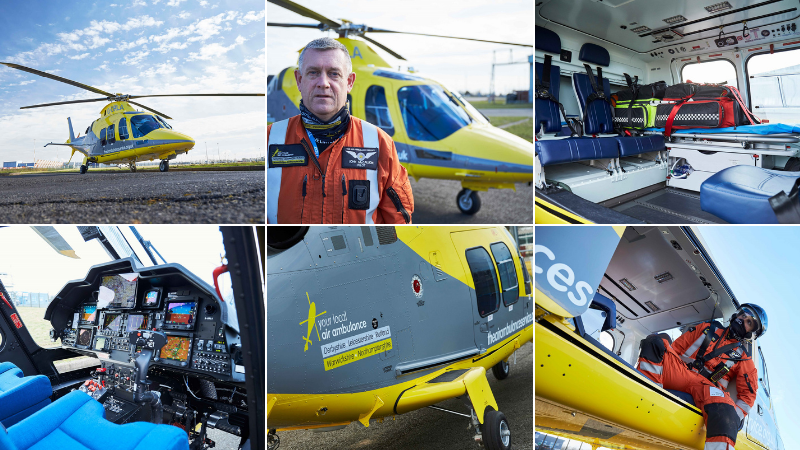 Following an exhaustive tender process to determine which helicopters would best meet clinicians and patients’ needs, TAAS opted for a like-for-like replacement in Leonardo’s latest AW109 GrandNew to replace the ageing fleet.

The new AW109 derivative was chosen for its proven performance as the world’s fastest commercial twin-engine helicopter and its ability to start-up and shut-down engines in a much shorter time than many of its competitors. These seconds and minutes saved can often be vital in delivering lifesaving critical care medicine to patients.

Enhanced technology and navigation and an increase in weight carrying capability were all key factors in selecting the AW109. Being able to carry four crew, and a patient ensures the charity will also be able to support the NHS by offering training opportunities for Pre Hospital Emergency Medicine (PHEM) doctors.

The new helicopters, which will be crewed by a pilot, doctor and critical care paramedic, offer an improved clinical area for the crews to work in while caring for a patient, which includes a new syringe pump system as well as better storage solutions for vital lifesaving equipment such as a defibrillator, ventilator, ultrasound and other vital medical equipment.

“What a monumental day for the charity. It’s been a complex project over the past 18 months, especially given the global pandemic, but now the exciting work really starts”.

“Our fantastic, state-of-the-art new aircraft enables us to get to our patients as quickly and as safely as possible, and often time saved can mean a life saved. They also enable us to continue to support vital training for the next generation of NHS PHEM doctors.

“I would like to thank everyone who has helped deliver this complex project in record time, and would especially like to single out Sloane Helicopters for their commitment despite the significant challenges encountered with the project due to the global pandemic over the past 12 months.”

Partners in EMAS and WMAS have welcomed the introduction of the new aircraft.

“We are delighted to hear about the arrival of the new Warwickshire and Northamptonshire Air Ambulance.  Our work with The Air Ambulance Service means that advanced critical care paramedics and doctors are available to our crews, which can only benefit the care provided to our patients.

“The evidence is clear in cases such as major trauma and cardiac arrests that having advanced clinical care at the scene of the incident and the potential for rapid onward transit to specialist hospitals by air ambulance can dramatically increase the chances of the patient not only surviving but going on to recover well and have a good quality of life.”

“It is great news to see the introduction of this replacement air ambulance, which will help respond in the region.

“For many years, we have worked very closely with The Air Ambulance Service, which provides vital support to East Midlands Ambulance Service at incidents across the Derbyshire, Leicestershire, Rutland and Northamptonshire areas, helping to support our staff and patients who need us the most.

“This addition will only further enhance the support we can give together as a service to the East Midlands.”

The aircraft will be leased over the next seven years from Sloane Helicopters in Northamptonshire and are the latest to come online through this successful partnership.

“As a supporter and operator of the WNAA and DLRAA since the former’s inception in 2003, we are delighted to supply the charity with two new, state-of-the-art Leonardo AW109 GrandNew EMS helicopters.

“The AW109 GrandNew is the benchmark aircraft in its category, in terms of performance, speed and safety standards, making it the ideal helicopter for air ambulance operations.

“Introducing these aircraft into service further strengthens our long-standing partnership with the charity spanning over 18 years. Furthermore, the engineering team at Sloane has provided an excellent service in preparing the helicopters, during this period of lockdown, by incorporating numerous clinical and operational modifications to ensure that the best clinical outcomes are achieved.”

Both aircraft were built in Italy by Leonardo before embarking on the lengthy journey to the UK, where Sloane fitted the aircraft with clinical interiors.

“Leonardo is proud to be supporting the lifesaving missions of The Air Ambulance Service with the addition of two AW109 GrandNew helicopters to its fleet, delivered through Sloane Helicopters.

“The introduction of these helicopters extends our long-standing relationship with the charity since its HEMS operations commenced in 2003.  The new aircraft further enhance and future proof the charity’s operations with its sophisticated avionics suite with full Performance Based Navigation compliance. The combination of a rapid start take-off, best performance, and the lowest carbon emissions in its class ensures the AW109 GrandNew is the fastest helicopter to the scene, enabling The Air Ambulance Service to reach its patients quickly, safely, and efficiently.”

Anyone wishing to find out more about the charity’s lifesaving work can call 0300 3045 999 or visit: www.theairambulanceservice.org.uk.