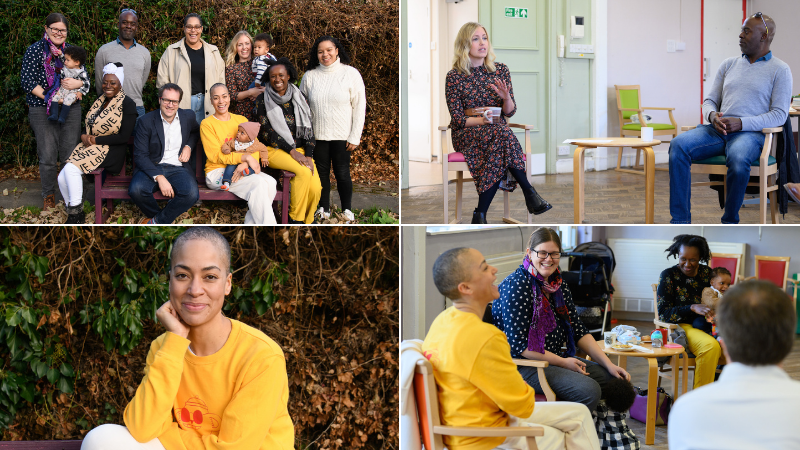 The actor, who is starring in the Young Vic’s production of Hamlet until 13 November, learned about the work of the services and shared her own personal experiences of mental health and motherhood.

At the time she gave birth to her son Max, Cush was living in New York and starring as lawyer Lucca Quinn in the Emmy award-winning CBS drama ‘The Good Fight’.

She revealed she would have loved to have attended a wellbeing group similar to Mindful Mums in New York, saying:

“It would have been the highlight of my week, every week.”

“Mindful Mums isn’t about singing nursery rhymes or competitive parenting. It’s about women supporting each other, sharing the highs and lows of becoming a mum and not having to pretend everything is perfect.

“The look of relief on women’s faces when they join the group is palpable.”

Being Dad facilitator Nev Walters spoke about the important role the service played in encouraging men to talk about issues.

“It’s a debilitating idea that you have to be the man with a plan and know what’s going on.

“The Being Dad group is changing this bit by bit. The best thing is that if someone’s a bit hesitant initially, once they’ve joined the group and realise they’re not going to be judged, they don’t stop talking.”

“People can come to Mindful Mums or Being Dad if they’re struggling with their mental health, but also if they’re not struggling. They’re open to all new parents because we can all do with looking after our wellbeing during that period of change.”

Other participants at the event shared their perspectives on what the groups meant to them.

Leeanne, a volunteer for Mindful Mums who initially joined as a participant, said:

“Getting involved was the best thing I ever did and a huge turning point for my mental health. When I started coming along, I realised everything I was feeling was normal. Even though it’s called Mindful Mums, it’s not about sitting there meditating. We talk about our bodies, what makes us sad, angry. We share common feelings.”

“It’s amazing what you do. Mindful Mums is like rock and roll NCT. You make your own rules, which is much more in-line with being a parent: no one gets a degree in Mum or Dad; we’re all just making it up but are expected to know everything.”

The actor was also enamoured of the Being Dad service. She said it was something her own father, who was a stay-at-home dad to Cush and her five siblings while her mother worked, would have appreciated.

Cush revealed she is keen to imbue her son Max with the positive approach to mental health she has developed through her own experiences.

“If there’s one thing I’d like to give him, it’s a healthy relationship with mental health. He may not always feel OK, but I want him to talk about it rather than hide things. It’s such an important skill.

“If your mental health is solid, you can pretty much survive anything.”