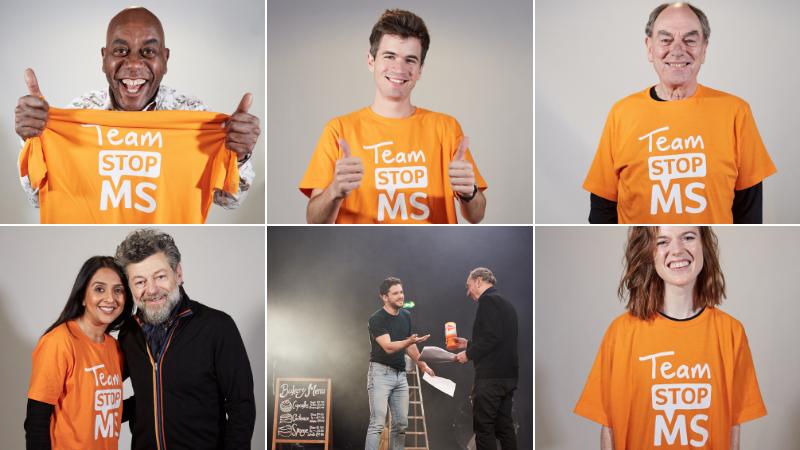 THE MS Society has launched a star-studded new campaign featuring Game of Thrones actors Kit Harington and Rose Leslie, performance-capture legend Andy Serkis, and a host of other celebrities with a close personal connection to multiple sclerosis (MS).

A creative production agency produced the ‘Team Stop MS’ campaign film. It sees stars ‘audition’ to join #TeamStopMS and help fund life-changing MS research by supporting the MS Society any way they can – whether that’s donating, fundraising, or simply spreading the word on social media.

Sharing what the campaign means to her, Game of Thrones star Rose Leslie said:

“The MS Society is very close to my heart, and the work they do is incredible. I want to support them in raising funds for MS research because we’re so close to finding real and long-lasting solutions to tackle this condition. We have shown through the pandemic that with concentrated effort and funding, we can overcome momentous challenges, and I believe we can do this with MS too.

“Being involved in the Team Stop MS shoot was a lot of fun, especially watching Andy Serkis do his thing – what a physical genius! Everybody stopped what they were doing and just admired him from afar. But it was also just a really positive thing to be part of generally, with everyone there sharing the common goal of stopping MS. I’m happy to be part of their family.”

The campaign is part of the MS Society’s Stop MS Appeal, which needs to raise £100 million to find treatments for everyone living with MS. The MS community were involved in its development and chose the name ‘Team Stop MS’ via a social media poll.

Speaking on his motivation for taking part, The Lord of the Rings star Andy Serkis said:

“I was thrilled to be asked to be part of this, as the MS Society has a particular significance for me, and I really wanted to contribute in some way – even if it meant gallivanting around in a mocap suit on my day off!

“One of my sisters has struggled with MS for many years. She and her partner are strong, funny and always positive, but I live in the hope that one day her condition can be halted. That hope is only alive because of the extraordinary work being done in MS research – and there is a real possibility that this condition will one day be beaten. These scientists are the real superheroes of today, and they need as much support as possible.”

Over 130,000 people live with MS in the UK and 2.3 million worldwide. The condition damages nerves in your body and makes it harder to do everyday things, like walk, talk, eat and think. While there are treatments available for the relapsing form of MS, and some emerging for progressive MS, there is currently nothing to stop someone from becoming more disabled as their condition advances.

The Directors for this film said:

“It’s a genuine privilege when you get to work on these kinds of projects, but one that comes with responsibility, as it’s not only about making the audience chuckle, we need to deliver an incredibly vital message throughout it all.

“Fortunately for us, we were spoiled with the supportive team at MS Society, the insanely talented celebrities and tireless crew… everyone gave it their all to get this inspirational message across. We couldn’t be more honoured to have a helping hand in this special film and hope it encourages everyone to help the Stop MS Appeal.”

The producer for the film said:

“We felt incredibly lucky to be able to contribute to a charity who are doing some seriously fantastic things for people living with MS. MS is no laughing matter, but hopefully this film makes the audience chuckle and draws some attention to what the brilliant people at MS Society are doing to alleviate what can be an incredibly challenging condition.”

Teresa Zaylor (36, from Colchester) lives with relapsing MS and stars in the film. She said:

“It’s scary to think that one day my MS might become progressive, and I won’t have the same treatment options. I’m so reliant on treatment, and it’s completely changed my life, and if it weren’t for people donating and supporting MS research, many people would be having a horrendous time.

“What’s great about Team Stop MS is that anyone can be involved and take some action to help people with MS. That’s the whole point. Whatever you do, however small, it could help make a huge difference to someone.”

“We’ve got a plan to stop MS for good, but our fundraising efforts were hit hard by the pandemic. After having to delay the launch of Team Stop MS for over a year, we’re so excited people can finally get back out there and fundraise again! We need to raise £100 million to find treatments for everyone living for MS – and the good news is we’re already over halfway there.

“We’re so grateful to our incredible celebrity supporters and everyone else in Team Stop MS who wants to help us reach our goal. By donating, fundraising, or simply spreading the word on social media, you can help create a future where no one has to worry about their MS getting worse.”