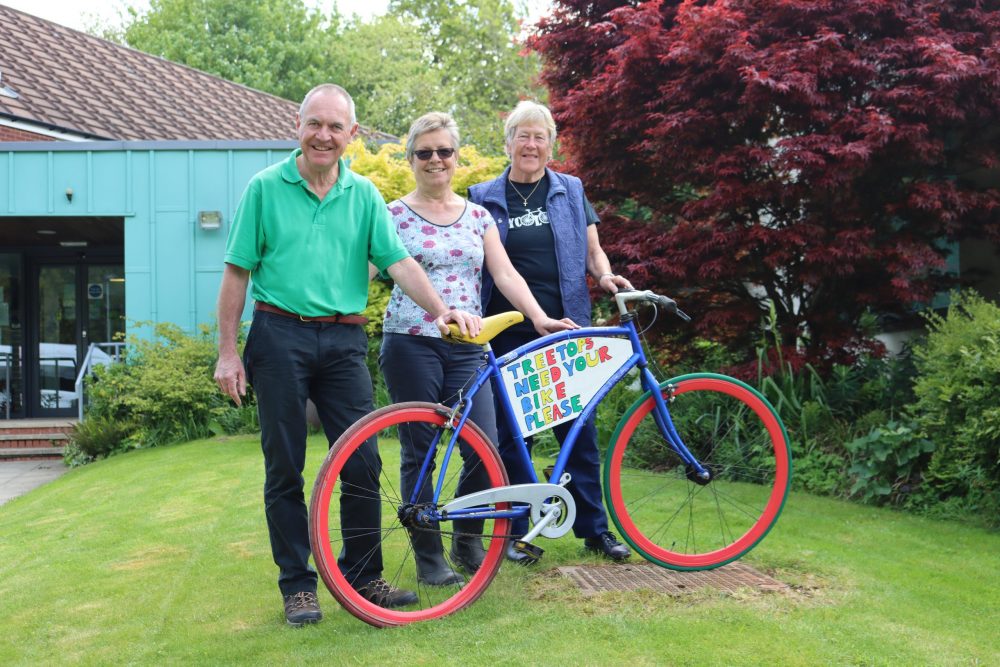 A RETIRED social services manager with a passion for fixing things is helping a local end-of-life charity to raise thousands of pounds.

Margaret Gregory (79) is one of a team of mechanical wizards involved in a popular bike recycling scheme. Started in January 2019, by volunteer “Pushbike Paul” Wilcox, the scheme sees Margaret – who used to repair lorries and trucks during a three-year spell in the Territorial Army – up-cycle donated cycles before they’re sold on to raise money for Treetops Hospice and other local charities.

Margaret, from Breaston, has been tinkering with bikes since she was nine. She explained how her involvement began:

“I was raising money for churches in Breaston and Draycott. A friend, Andy, who recycles everything in sight, used to bring me bikes to do up and I would sell them for the church.

“Sometimes there were specialist ones I didn’t have tools for, and so Paul came and did some repairs for me. It was around the time when Covid started that Paul really launched the bike recycling scheme and it just took off from there.”

Margaret estimates she has worked on just over 2,000 bikes since the scheme began.  She has around 16 bikes in her garden workshop at any one time which she is working on. She then sells them to families and bike dealers, passing on the proceeds.

“When I was a kid, my father couldn’t mend a puncture, so I had to start looking up mending all my own punctures and that’s when the bike repairs started,” said Margaret.

But her mechanical skills do not stop there.

“When I was about 17 to 20, I was in the Territorial Army for a bit, on-call for Suez, so we had to service the trucks and lorries and go out on manoeuvres. It was absolutely wonderful,” said Margaret.

“It was practical. I could do anything with my own cars then. I can’t do it now as cars are so computerised, but I do have an old VW Golf I enjoy playing around with.”

Margaret has worked on all sorts of different bikes for the recycling scheme, from classic 1950s BSA and Raleigh bikes to modern high-end Whyte Bikes. While the more run-of-the-mill bikes are sold from Margaret’s garden, she puts the expensive makes through Bamfords Auctioneers and says she always has around two there waiting for auction.

Margaret says the work keeps her fit and active as well as busy, something she has always been – not retiring until she was 72, spending 10 years as a senior lecturer in Law & Social Services at the University of Derby after leaving her role in social services.

“With every bike recycled and sold, Margaret and the team are helping us to care for terminally ill patients and their families in the local community.

“Their support makes such a big difference and we want to thank them all very much.”

Margaret added: “Fundraising is something you learn to do. I love wheeling and dealing, I love making the money and giving it away. I don’t have a serious philosophy about it I just think giving is part of human nature and if you can do it and enjoy it, great.”